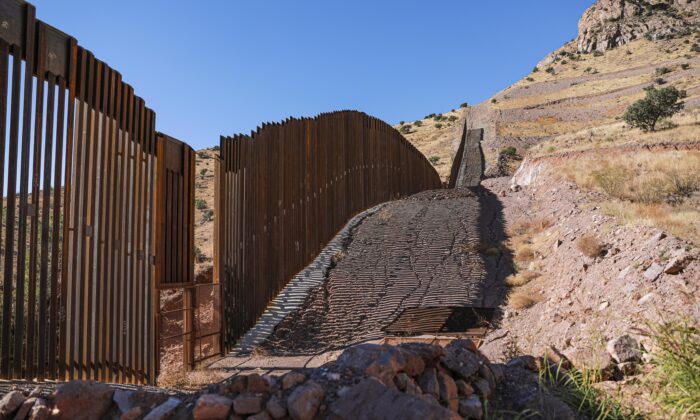 An autopsy says a Mexican woman found hanging on the border wall in southern Arizona choked to death in an accident when she became entangled in climbing gear.

The Pima County Medical Examiner’s report, conducted for the Cochise County Sheriff’s office, said Griselda Anais Verduzco Armenta, 31, was discovered suspended from the border wall entrapped by a cord, tie-down straps, and seat belt around her neck, chest, and arms.

The report, released this week, said Verduzco Armenta had abrasions to the head, torso, and extremities, along with contusions, a laceration on her lower right leg, and a fractured vertebra.

The Cochise County Sheriff’s Office previously said that the woman was found at approximately 11 p.m. on April 11.

Deputies were alerted by Mexican authorities of a woman who “was ensnared on the border fence,” the office said, describing her as being “trapped upside down for a significant amount of time.”

The woman was freed and rushed to a local hospital, where she was pronounced dead.

The body showed attempts to revive her, according to the autopsy.

A 31-year-old man died in March after climbing a section of wall just west of the Paso Del Norte port of entry in Texas.

A Border Patrol agent, notified by a remote surveillance system, went to the area and found the Mexican man conscious but suffering from injuries that he allegedly sustained in a fall from the fence, Customs and Border Protection said.

The man was treated at a hospital but was eventually declared deceased.

After Verduzco Armenta died, Cochise County Sheriff Mark Dannels said that deaths from climbing the wall “are not political, they are humanitarian realities that someone has lost a loved one in a senseless tragedy.”

“We have to do better in finding solutions to the challenges facing our border, and we have to do it for the right reasons. Regardless of opinions, it is the facts that should direct our progress and we will keep working towards a shared goal of border safety and security,” he said.

Some of the last construction carried out before the end of former President Donald Trump’s term was in the area where the woman was ensnared, with 30-foot-tall (9-meter) steel columns erected on U.S. Bureau of Land Management property.

President Joe Biden halted border wall construction almost immediately after taking office, a move that cost approximately $72 million.  Blas Nunez-Neto, a top Biden administration official, told members of Congress this week that the border wall “is effective in rerouting migration” but that in more remote areas, “we have found that it is still fairly easy for migrants to make holes in the wall.”