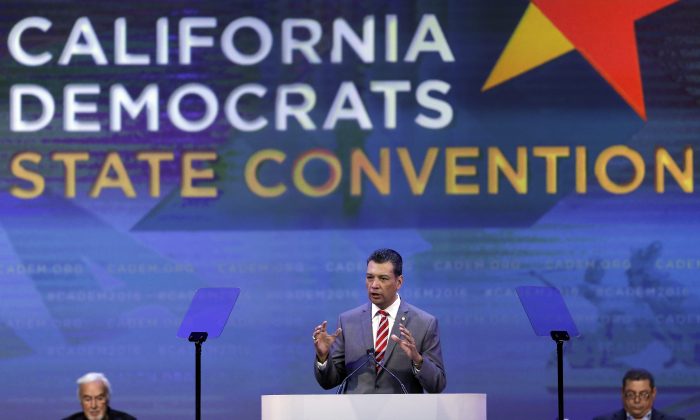 In this Saturday, Feb. 27, 2016, photo California Secretary of State Alex Padilla gestures while speaking before the California Democrats State Convention in San Jose, Calif. “There’s no other fundamental right we have as citizens that requires you to register or fill out a form,” said Padilla, who advocated for a California legislation for automatic registration bills. (AP Photo/Ben Margot)
US

SALEM, Ore.—In a typical month, 2,000 people register to vote in Oregon. In the first six days of this year, more than 4,300 joined the voter rolls under a new initiative that automatically signs up voters when they apply for driver’s licenses.

Oregon is the first state to adopt the idea that it is the government’s responsibility to register voters—a move that could increase the number of registered voters by 13 percent by the November election.

California has approved similar legislation, and automatic registration bills have been introduced in more than a dozen other states. But it remains to be seen whether the idea will take hold beyond two West Coast states dominated by Democrats or whether the newly registered will decide to participate.

“There’s no other fundamental right we have as citizens that requires you to register or fill out a form,” said Alex Padilla, California’s Democratic secretary of state, who advocated for the law. “I don’t have to register somewhere to exercise my freedom of speech. I don’t have to fill out a form somewhere to exercise my right to not be discriminated against.”

Researchers at the Pew Center on the States reported in 2012, before the last presidential election, that 51 million Americans were eligible to vote but unregistered. Pew said last year that the United States has one of the lowest voter-participation rates of the democratic world.

“The job of our democracy is to make it easier, not make it harder for our citizens to be able to vote,” Obama told Democratic governors in a meeting at the White House on Feb. 19.

The idea has plenty of critics, who worry it will lead to more errors in voter registration databases, and could be especially problematic in the 12 states—including California—that grant driving privileges to people who can’t prove they’re legally in the United States. Officials in Oregon and California said driving records make clear who is a citizen.

“If you take away that need for that voter to communicate with their election official, mistakes will be made … due to limitation of resources,” said Logan Churchwell, a spokesman for True the Vote, which advocates policies to protect election integrity.

Automatic registration received no Republican votes in Oregon and just one in California. Recent election changes in GOP-dominated states have often gone in the other direction, requiring voters to take more steps to cast ballots such as showing photo identification or showing proof of citizenship at the time of registration.

Republicans say these efforts are intended to prevent voter fraud and secure public confidence in elections, but Democrats say they’re efforts to limit access to the ballot. Sixteen states will have more restrictive voting laws in the 2016 election than they did four years ago, according to the Brennan Center for Justice at New York University.

Voter registration laws in the U.S. have only been around for about 150 years, said Paul Gronke, a political science professor at Reed College in Portland who specializes in voter behavior.

“Voter registration was put in place in the U.S. in the 1870s and the 1880s—and the historical record is very clear—first to hold out Catholics, southern European immigrants and to push African Americans off the rolls,” he said.

Today, Gronke said, registration still is by far one of the biggest barriers to voting.

Minorities, lower-income and young people are the least likely groups to register because they move around a lot and forget to update their address or miss the deadline, or politics isn’t a priority to them while they’re preoccupied with making ends meet.

Researchers are eager to see whether people who are automatically registered actually cast ballots. Once registered, potential voters will begin getting mail and telephone calls they’ve never received before, from campaigns and election administrators alike.

“There’s this whole apparatus for (get-out-the-vote) and engagement that does not happen when someone is not on the rolls,” said Myrna Perez, director of the Voting Rights and Elections Project at the Brennan Center.

Oregon began registering people eligible to vote in January, using data from applications for new or renewed driver’s licenses. They’re mailed a letter offering 21 days to opt out or select a political party.

In the first week, 4,653 new potential voters were identified and sent a letter. The vast majority, 84 percent, did nothing and were automatically added to their county’s voter rolls as nonpartisan voters. State officials are scheduled to release updated data later this week.

Because Oregon is one of three states that conduct elections entirely by mail, they’ll automatically get a ballot before the next election.

California is still working on the software and regulations for its program, which Padilla, the secretary of state, expects to be in place before the 2018 election.

“We want to give as many people as possible the opportunity to vote,” said Jeanne Atkins, Oregon’s Democratic secretary of state, “and this is one way of accomplishing that.”