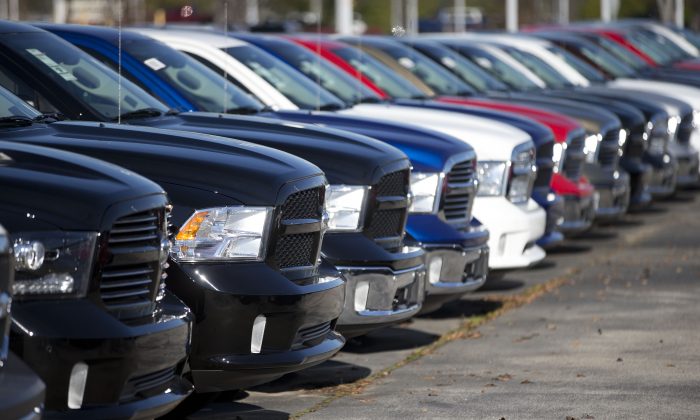 DETROIT—The U.S. is speeding toward what could be a record year for auto sales.

Sales of new cars and trucks rose by double-digit percentages at most major automakers in October, and companies are raising their expectations for the rest of the year. Ford now expects total U.S. sales of 17.4 million this year, just topping the record of 17.35 million from 2001.

GM said sales have run at an annual rate of 17.8 million for the past six months, putting the year on track to break the annual record. And the pace likely won’t slow as holiday promotions begin in November.

“It’s going to be hard not to hit that record at this pace,” said Jeff Schuster, senior vice president of auto sales forecasting for LMC Automotive. Schuster said the industry roared back from weak sales in the early months of the year.

Sales have been greased by cheap financing, low gas prices and an improving economy. Schuster said buyers are using the extra cash to buy bigger vehicles loaded with features. Sales of the eight-seat Cadillac Escalade, for example, rose 47 percent.

Automakers induced buyers further by offering incentives on outgoing 2015 models. TrueCar said the car companies spent 14.1 percent more than last October on cash-back promotions and other deals. Chevrolet was offering zero-percent financing for up to 72 months on a 2015 Camaro, while Toyota advertised $2,000 cash back on a 2015 Avalon sedan.

The deals are expected to continue. On Tuesday, Ford said it will offer no-haggle prices below the standard retail price on most vehicles through the end of this year. The discounts vary, but on a 2016 Ford Explorer, the starting price drops by $1,121 to $29,929.

“We’re in a strong market, but it’s a very competitive market with a lot of activity out there,” he said.

LaNeve reassured investors that Ford won’t spend more on incentives than it did in October, but will simply shift the money around.

Industry analysts worry that, as U.S. sales peak and eventually slow, automakers will fall into the trap they did a decade ago, resorting to heavy discounting in order to keep growing their sales. That lowered industry profits and slashed cars’ resale values.

Eric Lyman, TrueCar’s vice president of industry analysis, says pent-up demand from the recession should peter out in the middle of 2016. After that, automakers could face a period of declining sales. Deals popping up over the next few months are one hedge against that.

“This is probably the first we’re seeing automakers react to a possible decline in future demand,” Lyman said.

Volkswagen offered $2,000 to its customers last month to blunt the impact of its diesel emissions scandal, but the Volkswagen brand sold just 74 more cars in October than it did a year ago. VW’s other brands, Audi and Porsche, saw little impact because the scandal mostly affected four-cylinder diesels in Volkswagens. Audi sales rose 17 percent in October, while Porsche’s rose 11 percent.

That could change. The U.S. Environmental Protection Agency on Monday accused VW of cheating on six-cylinder Audi and Porsche models, a charge VW denies.

Among other automakers that reported Tuesday: