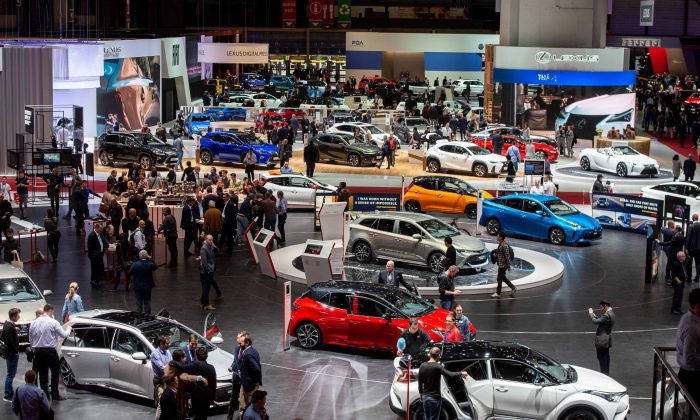 Auto Industry Disruption Is Here With Shakeup Starting in Geneva

The great auto-industry shakeout has started to arrive in force.

Anyone paying attention knows change is looming for global automakers grappling with new technologies, stricter emissions standards, and apps that have turned car buyers into renters or just riders.

While the shift sweeping the industry has so far been abstract, the veil started to come off this week at the Geneva car show. Discussions among executives was dominated by collaboration and consolidation rather than new models. In the markets, the fallout is claiming a growing cast of victims.

Profit warnings, missed targets, and falling stock prices at parts suppliers like Schaeffler AG and ElringKlinger AG—mainstays of the industry—show the depth of the rumbling underfoot. Paired with the news that luxury segment archrivals BMW AG and Daimler AG are teaming up on autonomous driving, and Volkswagen AG is allowing a startup to share the electric-car technology it wants to make a global standard, the industry’s new contours are taking shape.

“We are entering a period where chaos is going to make competition extremely selective,” PSA Group Chief Executive Officer Carlos Tavares said in Geneva. “This perhaps changes the way our companies are operating and it could also raise opportunities for deals eventually.”

At Geneva, traditionally a showcase for cars with flair and that extra bit of luxury, it was business as usual in some parts. Volkswagen AG’s Bugatti brand unveiled the most expensive car ever and Alfa Romeo showed off a sport utility vehicle concept. But the posh offerings were quickly overshadowed by talk of wholesale industrial restructuring.

After Bloomberg News reported on March 4 that PSA, which owns Peugeot, Citroen, and Opel, is seeking a merger or collaboration to add scale, Mike Manley—CEO of one potential target high on the list, Fiat Chrysler Automobiles NA—gave a surprisingly transparent response.

“If there’s an opportunity for partnership, for an alliance, for a merger that could make us stronger, I will clearly look into it,” Manley told reporters.

Tavares too endorsed the idea, confirming that he’s open to deals, “this one or another one.” Besides Fiat, Tavares has also discussed with advisers General Motors Co. and Tata Motor Ltd.’s troubled Jaguar Land Rover, people familiar with the matter have said.

Low industry valuations show investors want more changes with spending at a record, profits falling and new competitors vying to jump onto the autos bandwagon. Consolidation, while no silver bullet, would help eliminate the duplicate outlays on everything from expensive software ventures to battery technology.

BMW and Daimler, arch enemies for decades, in the past few weeks committed more than 1 billion euros ($1.1 billion) to work together on car-sharing and ride-hailing, and a few days later followed up with a plan to work together on autonomous cars. The companies are said to be in the initial stages of exploring deeper ties that could include developing vehicles together, something unthinkable just a few years ago.

In Geneva, Renault SA and Nissan Motor Co., whose two-decade alliance has been strained by allegations of financial impropriety against their former leader, Carlos Ghosn, made a show of unity and pledged to continue despite the tensions.

Volkswagen, too, is opening up, sharing its new electric-vehicle platform, dubbed MEB, with a battery-car startup based in Aachen, Germany. While e.Go Mobile AG is run by a successful entrepreneur-professor who’s already upstaged Daimler and VW with a successful range of electric delivery vans, it’s still a small fry that a few years ago would have little chance of gaining the attention of the world’s biggest carmaker.

VW CEO Herbert Diess is also conducting a brand review, while discussing a collaboration with Ford Motor Co. and trying to push through organizational changes that will make the company more agile. He recently said German carmakers had a 50/50 chance of staying ahead in the current transformation game. For their suppliers, the odds are probably longer.

“Not everybody can afford to keep spending all this money, especially with how fast this innovation is coming,” Don Walker, CEO of Austrian-Canadian supplier Magna International Inc. said in an interview. “There will be more cooperation, whether it’s through joint ventures or acquisitions.”

Schaeffler, which makes components for combustion engines and transmissions, on March 6 said it would let go 900 workers and abandon long-standing earnings targets. The stock has tumbled some 44 percent in the past year, after two profit warnings in 2018.

Sister tire maker and parts supplier Continental AG, which has similarly missed targets, has declined by more than a third. It’s even worse among slightly smaller suppliers like ElringKlinger, which makes cylinder-head gaskets, which has suffered a 60 percent stock drop.

“Darwin, survival of the fittest, the signals are everywhere,” said Arndt Ellinghorst, a London-based analyst with Evercore ISI, echoing a favorite Tavares phrase. “The combination of extreme emission regulation, the convergence of mobility and tech plus slowing end-markets will now finally force consolidation.”