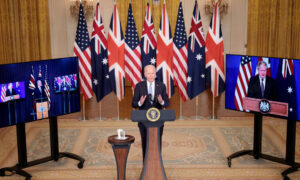 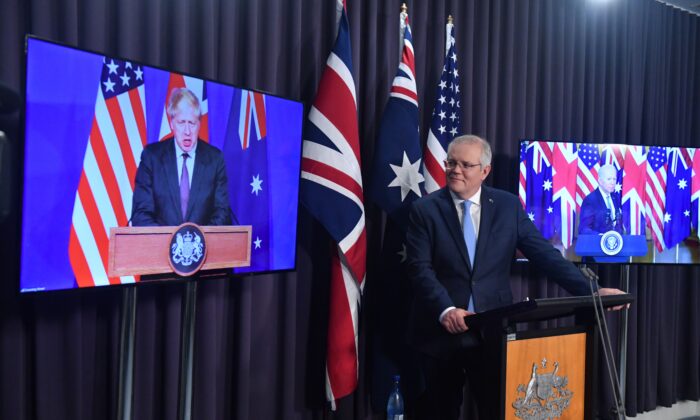 In the wake of the announcement of the new Australia-U.S.-UK (AUKUS) security pact in the Indo-Pacific region, many commentators have lamented that it will provoke Beijing to adopt more aggressive policies and that Southeast Asian countries like Malaysia, Indonesia, Singapore, and Vietnam will resent being forced to choose sides between China and the United States.

These comments tend to come from sources known to have close ties and/or to sympathize with Beijing. It is therefore important to look closely at the whole picture in order to have a sure understanding of the origins and significance of the security alliance.

The story really opens in 2014 when China began dredging around reefs and small islands in the South China Sea as the start of a project to create air and naval bases with command over the whole region. This was accompanied by an increasing number of incidents in which Chinese naval auxiliary boats would sink the fishing ships and oil sampling ships of other nations with claims to control part of the Sea.

In 2015, Chinese leader Xi Jinping visited President Barack Obama in the United States. At Obama’s request, Xi promised not to militarize the South China Sea. Then he returned to Beijing and proceeded to militarize the area. At that time, there were no articles talking about how Beijing might be forcing countries to choose between China and other less aggressive countries like the United States.

Then, China proceeded to continue building three aircraft carriers, numerous long- and short-range submarines, and more ships than the whole U.S. Navy. Still, no one mentioned that Beijing might be forcing its neighbors to make a choice between China and the United States.

Only in the wake of this mighty unilateral effort by China, did the United States, at the behest of some of its long-time allies like Japan, Taiwan, South Korea, the Philippines, Singapore, and even including former enemy Vietnam, begin expanding its forces in the region.

Thus, it is important to emphasize that U.S. action followed only after the massive expansion of territorial claims and forces by China. Those concerned about being “forced to choose between China and the United States” need to brush the cobwebs out of their memories and rephrase the question to ask why it is that Beijing is forcing them to make a choice.

It was only after Xi had clearly nullified his own promise to Obama that Washington adopted the Pivot to Asia strategy that has shifted U.S. foreign policy effort from Europe and the Middle East to the Indo-Pacific area. The first step was an increase in U.S. forces stationed in Australia, and pre-positioning of some weapons and supplies at forward locations in Japan, the Philippines, and Singapore.

The second major step was the establishment of the Quad, an alliance between the United States, Japan, Australia, and India. In this effort, Japan took a strong lead and Vietnam made known that it strongly supported the new alliance that could count on its support. Indeed, Japan turned over some of its Coast Guard and other vessels to the Philippines and Vietnam as a way of strengthening their ability to deal with the constant incursions they were suffering from the Chinese regime. Meanwhile, Singapore expanded its offer to become a kind of quasi-home port away from home for the U.S. Seventh Fleet.

While this was happening, the Chinese regime continued to harass the Indonesian, Malaysian, Vietnamese, and Filipino fishing grounds and boats. Even more significant, however, was the fact that China became angry with Australia. In the wake of Australian Prime Minister Scott Morrison’s request that Beijing allow a full independent investigation of its Wuhan lab in connection with the origins and spread of COVID-19, Beijing retaliated by dramatically reducing its imports of Australian iron ore, coal, wine, barley, and lobsters. In fact, in the case of the lobsters, Beijing made no public announcement—it merely allowed them to die on the docks of Shanghai.

At the same time, the Chinese regime invaded what it thinks is lawfully Chinese territory in India. In other words, Beijing seems frequently to take violent action that forces countries to choose between China and other more friendly, less aggressive free world nations.

Far from forcing any country to choose between the United States and China, the AUKUS pact provides a way for countries to resist being forced into the Chinese tent.