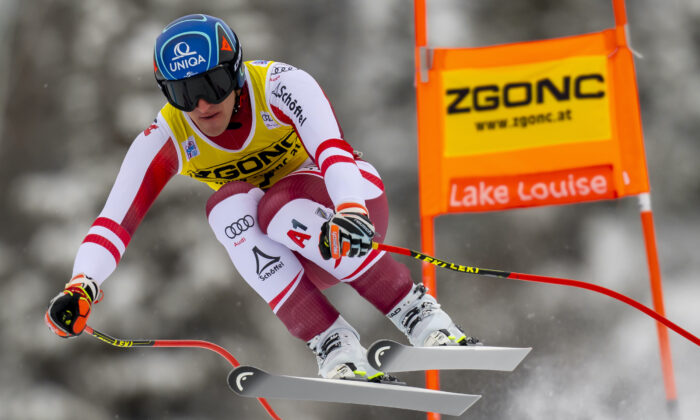 Matthias Mayer of Austria blasts down the course on his way to winning the Men’s World Cup downhill in Lake Louise, Alta., on Nov. 27, 2021. (Frank Gunn/The Canadian Press)
International

“Of course, I’m very satisfied,” said Mayer, also the 2018 downhill winner at Lake Louise. “It’s the first race of the season. I know that I had some good work in summer. Not only me. Also, Vincent had good work this summer. As a team, we are in very good shape.”

“All in all, a really good run,” Kriechmayr said. “Matthias was amazing today and he was the right winner for this race.”

Feuz was the overall leader in men’s downhill last season, followed by Mayer.

After more than 15 inches of snow in a 24-hour period forced the cancellation of a downhill Friday, course workers worked early Saturday to shift snow and groom the course for a noon start.

“They did really good work on the slope today,” Mayer said. “It was good skiing today and it was World Cup conditions.”

Ryan Cochran-Siegle was the top U.S. finisher in 10th.

A super-G is set for Sunday. The women arrive in Alberta next week for two downhills and a super-G at the resort in Banff National Park.