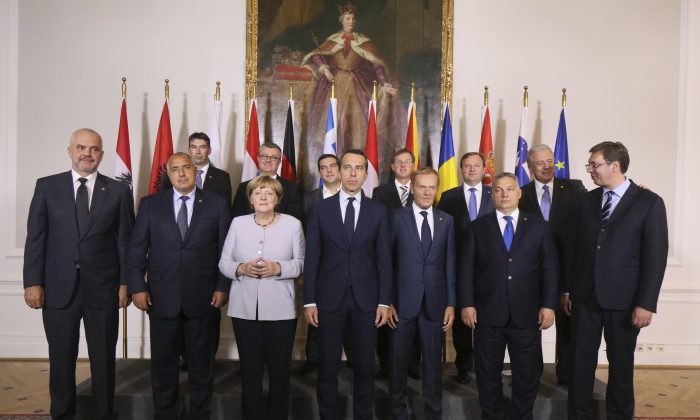 Austrian Chancellor Christian Kern (C) poses for a group after a meeting with his counterparts from Germany and West Balkans on strategies to deal with Europe's migrant crisis in Vienna, Austria, on Sept. 24, 2016. (AP Photo/Ronald Zak)
Europe

VIENNA—Austria’s chancellor vowed Saturday to better protect the European Union’s outer borders to curb illegal migration, as he held a summit with his German, Greek and west Balkans counterparts to debate strategies to deal with Europe’s migrant crisis.

“We need to regain control over our external border,” Chancellor Christian Kern said at a press conference after the Vienna summit. “We need to decide who gets to come to Europe,” not the traffickers.

German Chancellor Angela Merkel said a speedier return of migrants who didn’t get asylum status is another important goal.

“We therefore talked today about the necessity of quickly finishing agreements with third countries, especially with Africa, but also Pakistan and Afghanistan,” Merkel said. “So that those who cannot stay for humanitarian reasons will be returned to their home countries.”

Both Merkel and Kern stressed that the migrants’ situation in Europe was better than a year ago, when thousands crossed the Mediterranean Sea each day from Turkey to Greece then trekked up the Balkans to northern Europe. About one million migrants entered Europe last year, the majority from Syria, Iraq, Afghanistan and other crisis-torn countries.

The closing of Balkans migrant route in the spring and the March EU-Turkey agreement to reduce migration have led to a dramatic reduction of the number of people reaching northern Europe.

Still, both leaders pointed out that they were considering strengthening the EU’s border agency Frontex not only along the continent’s sea borders, but also to help protect inner European borders, for example at the border between Greece and Macedonia.

“We need to make sure, practically and politically, that the west Balkans route will remain closed to illegal migration for good,” EU Council President Donald Tusk said.

Merkel also offered support for Greece and Italy and said Germany would take in several hundred migrants from both countries every month, the German news agency dpa reported.