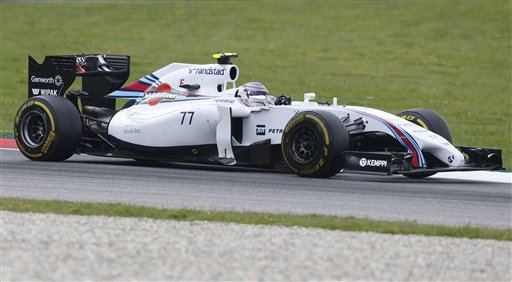 Williams driver Valtteri Bottas of Finland steers his car during the first training session at the race track in Spielberg,  Austria,  Friday, June 20, 2014. The Austrian Formula One Grand Prix will be held on Sunday. (AP Photo/Darko Bandic)
Motorsports

The race on the Spielberg circuit in Germany is scheduled to start at 8 a.m. EDT (1 p.m. GMT).

It will be broadcast on NBC Sports Network in the United States, Sky Sports F1 in the United Kingdom, Channel Ten or Channel One in Australia, Sky Sport in New Zealand, and Fox Sports in Mexico, Central America, and South America.

It will also be shown on RTL in Ireland, on TSN in Canada, on OTE TV in Greece, on M1 in Hungary, Sky F1 in Italy, MTV Max in Finland, Polsat Sport in Poland, SLO 2 in Slovenia, Sport1 in The Netherlands, BBC in Belgium, RTL or Sky Deutschland in Germany, Nova in the Czech Republic, TV3+ in Denmark, SportTV in Portugal, Abu Dhabi Sports 2 in the United Arab Emirates, Star Sports 4 in India,

Live streaming is available on NBC in the United States, Tenplay.com in Australia, SKY in New Zealand, TELMEX in Mexico, Foxplay.com in Central and South America, Star Sports in India, Sporting Telenet in Belgium, Nova in the Czech Republic.

See the lineup and a preview below. Qualifying time included.

Williams driver Felipe Massa of Brazil prepares for the third practice session at the race track in Spielberg, Austria, Saturday, June 21, 2014. The Austrian Formula One Grand Prix will be held on Sunday. (AP Photo/Kerstin Joensson)

SPIELBERG, Austria—Felipe Massa felt like he was kick-starting his Formula One career after earning his first pole position since 2008 as Williams stunned Mercedes in Austrian Grand Prix qualifying on Saturday.

Massa and Williams teammate Valtteri Bottas posted the two fastest times, setting up the first race of the season without Mercedes in the front row.

Championship leader Nico Rosberg was third, while Mercedes teammate Lewis Hamilton went off track in the final qualifying round and will start ninth.

“After a long time that I couldn’t be in this place, I hope this is the beginning of some great possibilities again,” Massa said, adding he was “very emotional.”

It’s Massa 16th career pole but first since the Brazilian GP six years ago. Williams had not had a 1-2 in qualifying since the German GP in 2003.

“It was such a great moment,” said the Brazilian, who has won 11 races in his career. “It was a very long time when I had my last pole position.”

Hamilton had one time scratched as all four of his wheels crossed the sideline in turn eight, while he came off track again and spun at his final attempt to beat Massa.

Bottas led the final practice earlier Saturday, edging Hamilton by 0.05, while Massa came third to send out a warning to Mercedes, which had the pole in all seven previous races.

“I am not totally suprised,” Williams deputy team boss Claire Williams said. “This track suits us with the long straights.”

According to Mercedes team boss Toto Wolff, Williams deserved the pole despite his team clearly dominating practice on Friday.

“Williams has been faster on the long straights,” Wolff said. “It’s good for the sport, though we are a bit upset.”

It’s the sixth time in eight races where Ricciardo beat his German teammate in qualifying.

Vettel failed to reach the final qualifying round for a third time this season as Red Bull kept struggling with the tire temperature management.

Vettel had the 13th time but gained one spot as 11th-place Force India driver Perez loses five places as a penalty following his crash with Massa in Montreal.

“It’s simple, we are just not fast enough,” Vettel said. “You saw we had problems Friday and we expected to do better today. It’s definitely not what you wish for … Sometimes you go a step forward and sometimes you go one back.”

Jenson Button also missed the last qualifying round and will start just ahead of Vettel.

Button, the 2009 champion, had to quit the session after just four laps because of a problem with the rear brakes of his McLaren.