Austria Will Start to Reopen Next Week After Pandemic Lockdown 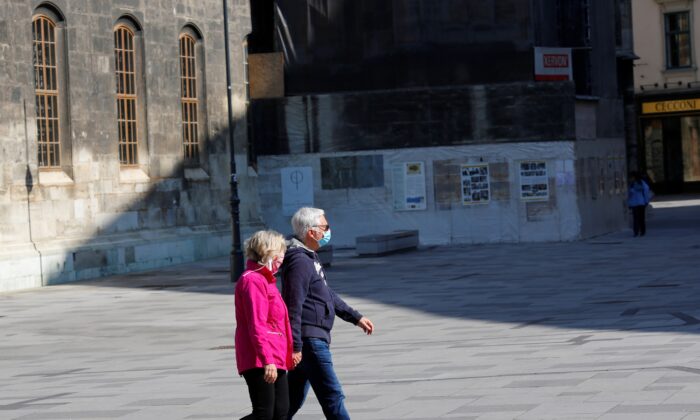 Austria announced plans toward reopening the country amid the COVID-19 pandemic.

Similar to many nations, when authorities ordered a lockdown in the country on March 16, businesses designated as nonessential were forced to close and the general public was told to stay at home unless they were leaving for groceries, medicine, or health care.

Businesses are required to implement social distancing measures such as having only one customer per 20 square meters (about 215 square feet) and regularly disinfecting the store.

People were required last week to wear masks in grocery stores. They’ll need to don coverings such as masks or scarves while on public transport starting April 13 and in all stores starting the next day. Employers are being told to decide whether to require workers to wear masks.

Other measures will stay in place. Schools will remain closed until mid-May and no public events can be held until June. Austrians also were told to stay home for Easter. Travel within the country will still be severely curtailed and a health certificate might be required.

No vaccine or proven treatment exists for COVID-19, the disease caused by the CCP (Chinese Communist Party) virus, commonly known as novel coronavirus. Researchers around the world are racing to develop a vaccine, which is expected sometime next year. Others are focusing on testing existing drugs against COVID-19, which has symptoms similar to the flu and can be deadly in a small percentage of patients, particularly the elderly and infirm.

Leaders around the world are grappling with how to ease harsh restrictions on work and movement and Kurz’s plan could provide a blueprint, along with plans announced in Norway, Denmark, and the Czech Republic.

New infections have dropped dramatically in Austria in recent days, doubling every 16.5 days, spurring authorities to announce the plan for reopening, Health Minister Rudolf Anschober said at the press conference. Random testing suggests about 1 percent of the Austrian population has contracted COVID-19.

Along with the opening up, authorities plan on rolling out or boosting containment measures. Random testing, forecasting, and antibody tests are three measures, along with isolating confirmed infections and testing people who came into contact with them.

Antibody tests can determine whether a person has had the CCP virus. A significant percentage of people who are infected show few or no symptoms, according to studies from multiple countries. American officials have pegged the number of asymptomatic cases as up to 25 percent.

The plan was a reversal of Kurz’s comments late last month, when he warned that the country was “a long way off easing the measures.” He told reporters on April 6 that Austria’s early action on the pandemic helped stave off more serious consequences and that Austria could be a pioneer in “opening up” with a goal of leaving the “crisis faster than others,” EURACTIV reported.

Measures imposed by the government, including the March 16 lockdown, saved tens of thousands of lives, Kurz asserted.

Austria’s confirmed cases, meanwhile, climbed to 13,237 on April 9. The death toll from the virus rose to 295.

Another 5,240 people have recovered from the illness, Austria’s Ministry of Health reported.

One way to start opening up countries from lockdowns could include first releasing people between the ages of 20 and 30 who no longer live with their parents, British researchers said in a new paper (pdf).

Young people who still live with their parents or other older adults could contract the illness and pass it on even if they suffer few or no symptoms, while those who don’t are free of such concerns.

Data from the United Kingdom government indicates such a plan could let 4.2 million young adults resume their daily lives, the University of Warwick researchers said. Of those, 2.6 million work in the private sector and are in danger of losing their jobs if the lockdown goes on for too long.

“The rationale for lockdown is to save lives in the short to medium term. However, severe damage is being done to the economy, future incomes, unemployment rates, levels of national debt, and the freedoms we enjoy as a modern society. Before long, some balance will have to be struck,” Andrew Oswald, professor of economics and behavioral science at the university, said in a statement.

“We support the existing lockdown strategy, but in the future it will be necessary to allow citizens to go back to some kind of normal life. Unless a vaccine is suddenly discovered, there are no risk-free or painless ways forward,” added Nick Powdthavee, a professor of behavioral economics.

U.S. policy advisors said in a recent report that phase one of their plan involved slowing the spread of the virus, while a state-by-state reopening could take place in phase two.

“During this phase, schools and businesses can reopen, and much of normal life can begin to resume in a phased approach. However, some physical distancing measures and limitations on gatherings will still need to be in place to prevent transmission from accelerating again,” they wrote.