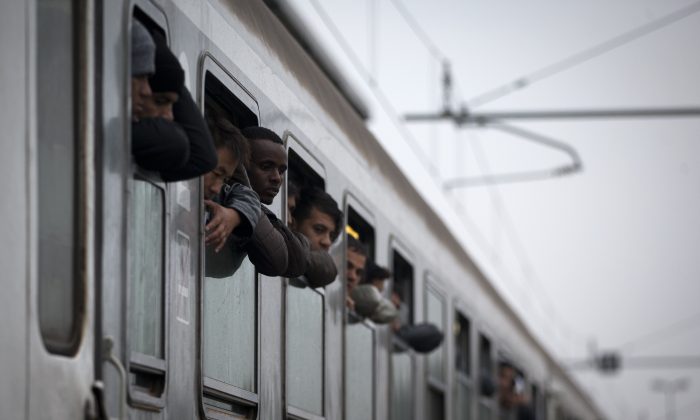 Migrants look out from a train that brought them from Croatia, in Dobova, Slovenia, Tuesday, Oct. 27, 2015. (AP Photo/Darko Bandic)
Europe

Austria to Build Fence Along Parts of Border With Slovenia

VIENNA—Austria, a strong critic of fences built to cope with Europe’s migrant influx, on Wednesday announced it is joining other nations that have either already erected border barriers or are planning to do so.

Austrian Interior Minister Johanna Mikl-Leitner insisted the move was aimed solely at bringing order to the unrelenting influx of people entering the country, telling parliament there were no plans “to build a fence around Austria.”

Still the project is a major shift for the country, which has preached the sanctity of unimpeded internal EU borders since the migrant crisis intensified earlier this year.

It is likely to run into domestic and international criticism for the signal it sends to other nations struggling to cope with tens of thousands of desperate people moving though their nations. And it could ignite a chain reaction along the land route in Eastern Europe used by those seeking a better life in prosperous European Union nations.

Slovenia, the main entry point into Austria, also said it was ready to build a fence, while Hungary has been championing the success of its razor-wire border fences with Serbia and Croatia and plans another one with Romania.

Greece already erected a barbed wire fence three years ago on a section of its border with Turkey not separated by a river. Bulgaria also has fenced off parts of its boundary to Turkey, while some Baltic states plan to erect fences on border segments with Russia.

But all of these existing or planned fences are either on outer EU borders or between two EU countries where one is not yet part of the Schengen Agreement meant to ensure the free movement of persons.

The Austria-Slovenia border is part of the agreement, however, and any barriers erected on it would be closely watched for possible violations.

People who come to us as refugees from Afghanistan cannot all expect to be able to stay in Germany.
— Thomas de Maiziere, interior minister, Germany

Germany, the country of choice for many fleeing regions torn by war and hardship, also signaled its intention to reduce its load of asylum-seekers. Syrian citizens are mostly being accepted, but Interior Minister Thomas de Maiziere said many of the Afghans pouring into the country will likely be sent home.

“People who come to us as refugees from Afghanistan cannot all expect to be able to stay in Germany,” he said, adding that Afghans will be considered on a case-by-case basis.

In Austria, Mikl-Leitner told parliament that the construction of “technical barriers” would begin after about 10 days of planning but gave no exact date for the start of the project.

Speaking to state broadcaster ORF, Mikl-Leitner cited the need for a fence to maintain public order while Defense Minister Gerald Klug said containers or railings could be set up to “control the refugees in an orderly way.”

Since Hungary sealed its borders with Serbia and Croatia on Sept. 15 and Oct. 17, thousands of refugees have been flowing into Slovenia daily. From there, they go to Austria with many continuing on to Germany.

Slovenian officials, who say their small nation cannot cope with the influx, have warned for days they would take action if Austria or Germany tried to close off their borders.

“If necessary, we are ready to put up the fence immediately” if a weekend plan by EU and Balkan leaders fails to stem the migrant surge, he said.

The usually excellent relations between Germany and Austria have been strained in recent days, with Germany accusing Austria on Wednesday of dropping asylum-seekers near their border after dark without warning.

Mikl-Leitner acknowledged a possible effect on migrants in Slovenia if Austria built a border barrier—a situation she said Austria already is struggling to deal with “because Germany is taking too few.”

“People are marching toward Germany because they feel they are invited there,” she said, alluding to perceptions that German Chancellor Angela Merkel has suggested all who have a right to asylum are welcome.

Merkel has said European countries have a duty to protect those who have a right to shelter, but also that all countries must share the burden. About 577,000 people seeking asylum came to Germany from January to the end of September this year, 164,000 of them in September alone, authorities say.

De Maiziere, Mikl-Leitner’s German counterpart, said it was Austria’s fault that “refugees are driven to certain points without warning at the fall of darkness.”

“Austria’s behavior in recent days was out of line,” he said.

German police have sought to keep the number of people crossing the border to 50 per hour at each crossing, according to Bavarian authorities.

In recent days, new legislation has come into force in Germany that is aimed at making it easier to send home people who don’t qualify for asylum—a measure aimed primarily at citizens of Balkan nations such as Albania and Kosovo.

On Afghanistan, de Maiziere argued that Germany and other western nations have poured development aid into the country as well as sending troops and police to help train security forces there. He says Afghanistan’s government agrees with Berlin that citizens should stay and help rebuild the country.