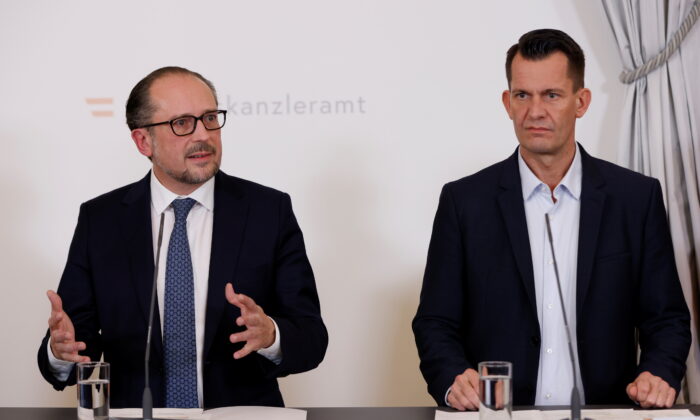 Austria to Apply Harsher Restrictions on the Unvaccinated

Austria has introduced new rules that will go into effect on Nov. 8 that prevent unvaccinated people from accessing many public facilities such as restaurants, bars, hotels, and hairdressers.

“We’re going to have to tighten the reins on the unvaccinated,” Austrian Chancellor Alexander Schallenberg said as he introduced the measures after a meeting with state-level leaders, reported Deutsche Welle (DW).

“It is simply our responsibility to protect the people in our country,” Schallenberg said. “The occupancies of intensive-care beds are increasing significantly faster than we had expected.”

He said 600 intensive-care beds are filled with COVID-19 patients.

Unvaccinated people are also not allowed to participate in events with more than 25 people or access ski lifts.

The latest restrictions come as the central European nation reported a near-record 9,388 cases on Nov. 5, reported the state broadcaster. There were 8,554 new cases on Nov. 7.

Before the latest measures, people could enter public venues and restaurants if they showed a negative PCR test result or proved that they had recovered from the CCP (Chinese Communist Party) virus, commonly known as the novel coronavirus, which is the pathogen that causes COVID-19.

According to DW, the government is applying a four-week transition period during which proof of a first vaccination plus a PCR test will allow entry to buildings and events.

With 11.7 million doses given out, Austria has a full vaccination rate of 63.5 percent, one of the lowest in Western Europe. Neighboring Germany has a fully vaccinated rate of 67 percent, with 113 million doses, while Italy comes in at 73 percent.

Two provinces, Salzburg and Upper Austria, have accounted for the majority of new COVID-19 cases. Burgenland and Vienna had the lowest incidences.

Based on online information, for visitors entering into the country, local authorities only consider 2-dose-vaccinations valid for 9 months after the second dose. All adults in Austria are eligible for booster shots if six months have passed since their last dose.

With 23,788 new cases on Nov. 6, neighboring Germany has reported a recent upswing in infection rates. Till now, almost 4.78 million people in the country have been infected with the CCP virus while the death toll is 96,529.