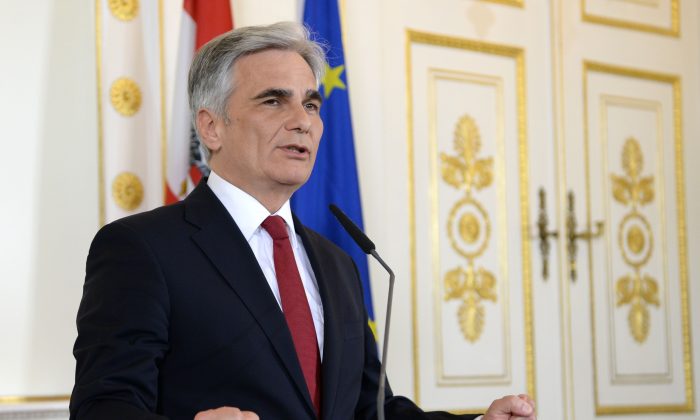 Austrian Chancellor Werner Faymann announces his withdrawal from all his offices during a press conference in Vienna, Austria, on May 9, 2016. (Roland Schlager/AFP/Getty Images)
Opinion

After his party scored a disastrous showing in a presidential election, Austrian Chancellor Werner Faymann has suddenly announced that he is resigning from office. While it’s hardly unheard of for a country to change its head of government mid-term, what’s happened in Austria really is out of the ordinary—and could be a harbinger of more shocking things to come.

Faymann’s decision comes two weeks before the country chooses its new president in a run-off election between Alexander van der Bellen, an independent candidate and green party politician, and Norbert Hofer, the candidate of the far-right Freedom Party of Austria (FPÖ), who appalled many onlookers by winning 36 percent of the vote in the first round.

Many of Faymann’s key political colleagues appear to have had no inkling that Faymann would be announcing this decision, and the media were apparently oblivious, too. But others find it less surprising that Faymann resigned than that he managed to hang on for so long.

He was not a charismatic chancellor, and was widely seen as lacking in vision and dynamism. He was greeted with boos and whistles at this year’s traditional May Day party rally in Vienna, and the SPÖ’s dismal 11.28 percent showing in the first round of the presidential election led to renewed calls for his resignation.

He and his party have faced the huge challenge of coping with an influx of refugees and asylum seekers. In fact, the vast majority of the thousands of refugees reaching Austria travel onwards to Germany and beyond, but the chancellor changed his country’s line. His government began building a fence on the border with Slovenia and more recently contemplated the reintroduction of border controls on the Brenner Pass on the Italian frontier. Faymann’s calls to lower and limit the numbers of migrants have been popular with some, but deeply unpopular with others.

For now, Austria can carry on under its grand coalition of the two major parties. But the People’s Party is also contemplating electing a new party leader after their presidential candidate, Andreas Khol, did just as badly in the first round election—if things keep going this way, the FPÖ may soon get a major opening.

The SPÖ’s arm’s-length attitude to the FPÖ was crystal clear until 2015, when the Burgenland Social Democrats and FPÖ unexpectedly formed a coalition. Ever since, the possibility that the Social Democrats would contemplate a coalition with the FPÖ at national level has been lurking in the background, and it’s now being heavily debated in the Austrian media.

This gets to the crux of what is at stake in Austria, and why the political temperature is suddenly rising. As Christian Rainer, editor of Austria’s weekly news magazine, profil, wrote:

As far as home affairs are concerned, this is the most thorny situation I’ve known in 28 years of journalism. We’re without a chancellor and without a Social Democrat party leader, and it’s 13 days before a presidential election in which a dubious candidate from a dubious party—that isn’t even represented in government—has by far the best chance of becoming head of state.

This would be a shocking event. Hofer is a true hardliner, and has already expressed his preference for new elections in Austria should he become president. His interviews bear the hallmarks of his party background: he is against gay marriage, wants to stop what he calls an “invasion of Muslims,” and is decidedly anti-E.U.

To cap his far-right credentials, Hofer is also honorary member of a student fraternity organization (Burschenschaft), Marko-Germania zu Pinkafeld. These “fencing fraternities” subscribe to a men-only, fatherland-worshiping, conservative German worldview, and wear their colors with pride.

Even if the Social Democrats recover quickly from Faymann’s sudden exit, they will still be haunted by their internal disunity and muddled message. A simple change of leader will do little to remedy this. Far more worrying is the prospect that Austria could end up not just with an FPÖ president, but with the party’s current leader, H.C. Strache, the charismatic but more extreme heir to iconic xenophobe Jörg Haider, as the country’s chancellor.

Back in 2000, the E.U. slapped sanctions on Austria when the FPÖ entered a coalition government with the ÖVP. But today, Austria is not an outlier. One wonders whether there will be the will or courage to sanction Vienna again when so many other European electorates are voting for far-right leaders who were recently seen as marginal extremists. Austria, it seems, could be next.

Allyson Fiddler is a professor of German and Austrian studies at Lancaster University in the U.K. This article was originally published on The Conversation.