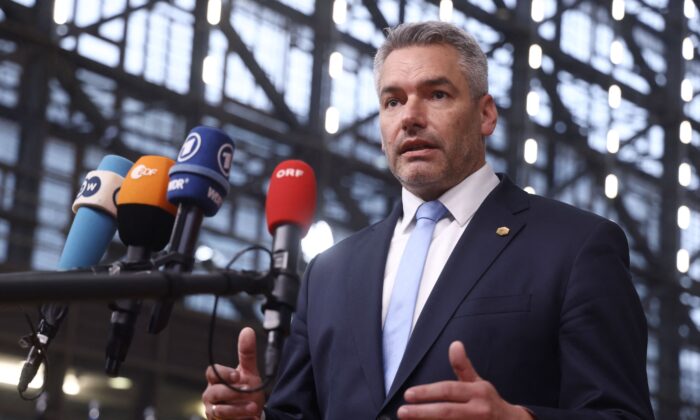 Chancellor of Austria Karl Nehammer speaks to the press as he arrives to attend an European Union Summit with all 27 EU leaders at The European Council Building in Brussels, Belgium, on Dec. 16, 2021. (Kenzo Tribouillard/AFP via Getty Images)
Europe

The Austrian government on Thursday announced that it will further expand CCP (Chinese Communist Party) virus measures in the country, citing a recent surge in Omicron cases.

“We have to adjust to a new situation with omicron, we have to adjust to the fact that the infection numbers will increase quickly,” Chancellor Karl Nehammer said during a news conference in Vienna, the capital of the Alpine country.

“We need to do everything we can possibly do together to prevent another lockdown,” he added.

Under new measures, Austrians are required again to wear masks outdoors—FFP2 or K95 types—when in crowded areas, or when a distance of 6 1/2 feet cannot be maintained, officials said.

The new set of rules also includes an expansion to an already existing measure that targets unvaccinated citizens, such as banning them from almost every store and hospitality venue.

Starting next week, the government said it will step up inspections to ensure shops are granting access only to Austrians who are fully vaccinated or have recovered from the CCP virus.

“If businesses do not comply, we will have the power to shut them down,” Nehammer said.

From Feb. 1, a limit will also be added to the validity of the “Green Pass”—a type of vaccination passport used in the country to retain access to a slew of social activities.

The certificate will expire after six months, officials said, noting that those who have received a booster shot are allowed to enjoy the benefits granted by the passport for another three months.

Asked about the draft law on mandatory COVID-19 vaccinations the government announced in December that has yet to pass, Nehammer said he saw it as a crucial part of the fight against the pandemic.

“The regulator is working on a solution that conforms to the constitution, but in our view, compulsory vaccination is indispensable,” he said.