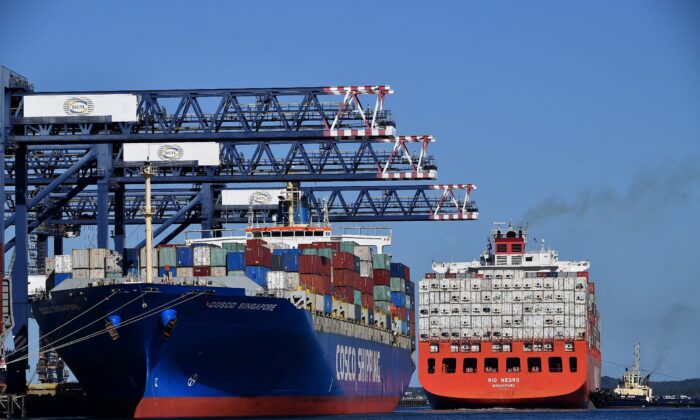 A cargo ship docks at Port Botany in Sydney, Australia, on May 3, 2022. (Saeed Khan/AFP via Getty Images)
Australia

Australia posted a further trade surplus record of $17.7 billion (US$12.34 billion) in June as the country continued to export considerable volumes of coal, iron ore and grain.

June’s surplus was also well above May’s record of $15 billion and outperformed economists’ expectations of a drop to $14 billion.

Data from the Australian Bureau of Statistics (ABS) showed that while exports jumped by $2.9 billion, or 5.1 percent, during the month, imports only climbed by $324 million, or 0.7 percent.

“The income flowing into Australia is supporting Aussie businesses at a crucial time, a time when fears of a recession are being expressed globally,” he wrote in a media release.

According to ANZ economists Madeline Dunk and David Plank, the growth in exports was driven by both price and volume. At the same time, net exports significantly contributed to June quarter GDP.

However, they cautioned that the surplus was about to reach its peak and would start to drop.

This is especially the case as China, Australia’s largest buyer, is trying to reduce coal imports and steel production.

On the other hand, Australia’s trade with India has skyrocketed as exports and imports soared by 108 percent and 63.5 percent, respectively.

“Exports to India are more important than the US and UK combined,” James said.

Iron ore exports rose by 5.5 percent to $15.5 billion due to higher demand from China, Vietnam and Taiwan.

While rural goods exports went up by 11.8 percent with robust gains in meat and grains, gold exports surged by 63.8 percent, following a 71 percent jump in May.

In addition, coal shipments dropped 0.6 percent to $14.35 billion due to softened coal prices.

Most notably, the export value of lithium, a key component in rechargeable batteries used in the electric vehicle industry, broke the $1 billion mark in June, with shipments soaring by 1189 percent compared to a year ago.

The ABS expected commodity exports to continue growing and contribute $9.4 billion in revenue to the Australian economy by the 2023-2024 financial year.