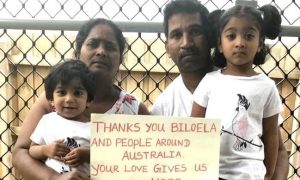 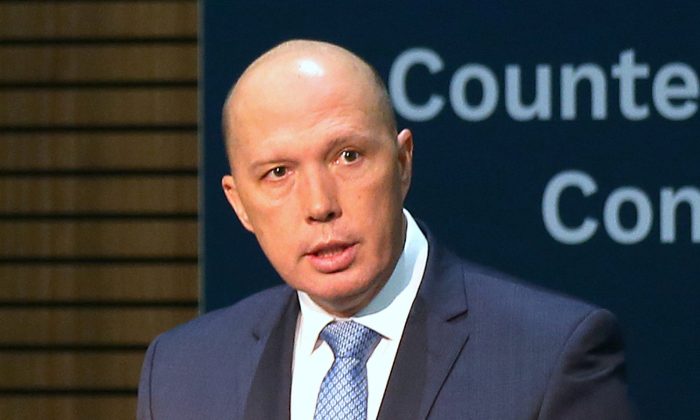 Australia's Home Affairs Minister Peter Dutton speaks at the opening of the Counter Terrorism Conference at being held during the one-off summit of 10-member Association of Southeast Asian Nations (ASEAN) in Sydney, Australia, March 17, 2018. (Rick Rycroft/Pool via Reuters/File photo)
Australia

Australia’s Home Affairs Minister Peter Dutton has blocked entry for an illegal immigrant on Nauru who applied to accompany his daughter to Australia for medical treatment.

The woman will travel to Australia for psychological assessment.

Peter Dutton tabled a statement to parliament on Wednesday detailing his decision about the “violent father,” whom he alleges would expose the Australian community to a serious risk of criminal conduct.

The home affairs department has not released the man’s identity.

The department advised Dutton the man has a history of violent and manipulative behaviour, including allegations of physical assault against his children.

Dutton has also been told the man has engaged in military service in Iran.

Under medical evacuation laws, doctors can recommend illegal immigrants and asylum seekers held offshore be brought to Australia for treatment.

They can be accompanied by family members, although the minister can reject transfers on national security grounds.

Dutton has approved the Iranian woman to travel, along with her brother.

The woman has other family members in Australia.

Labor home affairs spokeswoman Kristina Keneally said the minister’s decision proves the so-called medivac laws were working as they should.

“Why did Scott Morrison and Peter Dutton claim people of bad character could be transferred to Australia under medivac when it’s clear they have the powers to deny such transfers?” she asked.

“Peter Dutton is so desperate to distract from the 95,000 aeroplane people who have arrived on his watch, he’s boasting about using a power Labor ensured was in place to keep security threats out of the country.”

However, the Department of Home Affairs has previously told Labor that there have been cases under the current medivac laws that leave loopholes for those without genuine asylum claims. In August, the government said it was concerned about six asylum such persons to be sent to Australia under the medivac laws and that Dutton did not have the authority to stop the transfers.

“Due to the limited nature of the security and character grounds, the Minister was unable to refuse these transfers despite the Department determining that these six individuals raised character or security concerns,” the department said.

The Morrison government is looking to scrap the refugee medivac laws and is lobbying Senate crossbencher Jacqui Lambie for her support.

Senator Lambie has said the deteriorating situation in Syria may see her support the repeal.

By Finbar O’Mallon and Rebecca Gredley. With additional reporting by Epoch Time staff.