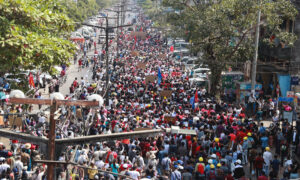 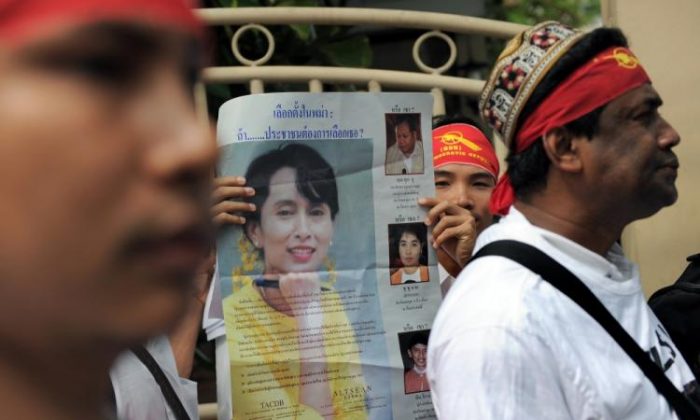 Political activists including exiles from Myanmar hold pictures of democracy icon Aung San Suu Kyi as they head towards the Myanmar embassy to stage a protest in Bangkok on November 7, 2010. (Christophe Archambault/AFP/Getty Images)
Australia

“Our ambassador and professor Turnell discussed his health, welfare and the conditions in which he is being detained,” Senator Payne said in a statement on Thursday.

“We continue to call for Professor Turnell’s immediate release, and for his rights and welfare to be upheld,” Payne said. “We are pressing the Myanmar authorities for regular consular access to Professor Turnell.”

Turnell, a highly regarded academic from Sydney’s Macquarie University, is the director of the Myanmar Development Institute in the capital Naypyitaw and has served as an advisor to Suu Kyi since December.

Turnell said on Saturday he was being detained in the first known arrest of a foreign citizen since the Feb. 1 military coup.

“I guess you will soon hear of it, but I am being detained,” Turnell told Reuters on Feb. 7. “Being charged with something, but not sure what. I am fine and strong and not guilty of anything.”

Turnell had previously written on Twitter that he was safe. But that he was heartbroken for what the coup meant for Myanmar.

Thanks everyone for your concern yesterday. Safe for now but heartbroken for what all this means for the people of Myanmar. The bravest, kindest people I know. They deserve so much better. pic.twitter.com/RA2YvCOEF7

Turnell’s wife Ha Vus has stood by her husband, writing on social media he had done nothing wrong. “We all know that wherever he is now he will be worried.”

“He worked for Myanmar by using his knowledge of economic from 20 years. He is someone who brings job opportunities and jobs to Myanmar people,” she said.

However, Turnell has been vocal in his criticism of the Burmese military which he believes is resistant to change and has become ensconced in the public service after the end of military dictatorship.

“The military will not easily eschew the power they have held on to for decades; the military budget remains completely separate from the national budget, and the civilian arm of government has no say on the military’s spending decisions.”

Former Australian Minister for Foreign Affairs Alexander Downer has said that it may very difficult to get Turnell out of Burma.

“It’s not easy to make representations to the Myanmar military, I know from experience,” Downer said.

“I think we would have almost no leverage,” he said. “It would depend on personal relationships that the ambassador has developed, and other staff in the Australian Embassy.”