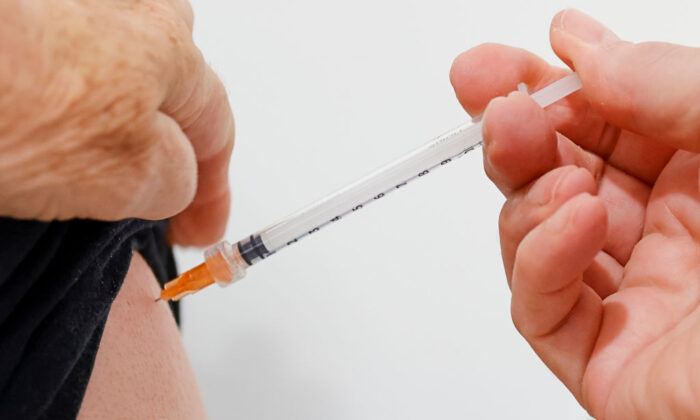 Australians over the age of 30 will be eligible to receive a fourth COVID-19 shot as early as next week, as more cases of the Omicron subvariants BA.4 and BA.5 emerge.

This comes after the Australian Technical Advisory Group on Immunisation (ATAGI) met on Wednesday to discuss the possibility of expanding eligibility for the fourth shot to age groups under 65, which Health Minister Mark Butler has confirmed will now be the case for everyone over 30.

Previously, only people over 65, those in aged or disability care facilities, and immunocompromised people were eligible to receive the fourth shot, otherwise known as the second booster.

Dr. Chris Moy, vice president of the Australian Medical Association (AMA), said on Thursday that ATAGI had based their decision on preventing severe disease, infection, as well as whether the benefit outweighed the risk.

“And until now, the evidence from Israel has been that the protection from severe disease after just your first booster sustained for a long period of time, and the only evidence for a fourth shot has been for those over the age of 60, where they showed an additional benefit of reducing the risk of severe disease,” he told the Australian Broadcasting Corporation.

“And for everybody else, the evidence until now has been that a fourth shot would only produce a transient effect against infection. But the evidence against severe disease hasn’t been so strong.”

Not Wanting to Release the 4th Shot Too Early

Moy said ATAGI has been under pressure for some time to approve the fourth shot, but decided to hold back because if they administered it too early and another variant came along, they would then need to decide whether a fifth shot should be made available, which there is currently no evidence for.

“So they overall have been trying to get the benefit and also not to go too early,” he said.

However, Moy stressed that Australia now faced a surge in the BA.4 and BA.5 Omicron subvariants, which he said was more infectious and likely to affect the lungs than previous Omicron variants.

With hospitals already under strain, the minister said “this is why the decision was coming.”

2nd Booster Not Recommended for Under 30s Because of Myocarditis Risk

Moy told the Australian Broadcasting Corporation that while he’s not on ATAGI’s technical advisory group, he believes that part of the reason why people under 30 will not be eligible for the second booster is because of the risk of myocarditis.

“But the thing is, is that what we do know with mRNA vaccines—the Pfizer, Moderna—there’s that rare condition called myocarditis, which is where the heart gets inflamed,” he said.

“It’s usually transient and people get over it, but that tends to occur in the younger age group, so this is why they’re saying 30 is probably the cut off where the benefit clearly outweighs any potential risk.”

According to Australia’s Therapeutic Goods Administration’s Database of Adverse Event Notifications, as of June 23, 2022, there were 1,264 cases of myocarditis following COVID-19 vaccine, with 12 allegedly resulting in death.

Regarding all adverse events from COVID-19 vaccines in Australia, 132,759 had been reported as of June 23, including 865 alleged deaths.