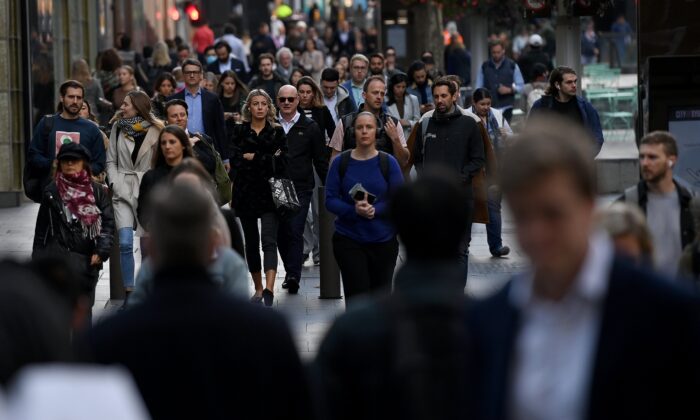 People are seen in the central business district of Sydney, Australia, on May 20, 2021. (AAP Image/Bianca De March)
Australia

The Australian unemployment rate for December 2021 fell to 4.2 percent, the lowest level since August 2008, just prior to the start of the Global Financial Crisis.

Data from the Australian Bureau of Statistics (ABS) revealed that around 65,000 jobs were created during the month, of which approximately two-thirds were filled by men and one-third by women.

ABS Head of labour statistics, Bjorn Jarvis, said the economic recovery in New South Wales and Victoria, the two most populous Australian states, had a large influence on the national figures.

The underemployment rate also fell to 6.6 percent. However, the participation rate remained the same at 66.1 percent, which is 0.2 percent higher than before the start of the pandemic and 0.2 percent lower than the historic high in May and June 2021.

The change in employment and participation was particularly large for 15 to 24-year-olds and accounted for more than half of the total movements.

Around 38,000 more Australian of this age group were employed, bringing the youth unemployment rate down 1.5 percent to 9.4 percent, the lowest since November 2008. Youth participation rate also increase to 70.5 percent, the highest since September 2008.

Westpac Bank Senior Economist Justin Smirk said the fall in the underemployment rate was significant because he finds it to be a better explanator for wages growth than unemployment.

“What was surprising is we did not jump in workers returning to the labour force,” he said.

“It is worth noting that for the last three months, the ABS estimate of the working age population contracted slightly again. The closure of the international borders are still biting and it will be interesting see where this goes in 2022 as the borders reopen,” he added.

Commonwealth Bank Senior Economist Kristina Clifton said the key issues going forward are how disruptive and how long the Omicron outbreak will be.

“Unlike during other outbreaks, the government has not announced any additional support measures for households and businesses as no lockdowns have been put into place,” Clifton said (pdf). “This could prove problematic if significant disruption is not short lived.”

“That said, household and business balance sheets are generally in good shape after previous rounds of government support.”