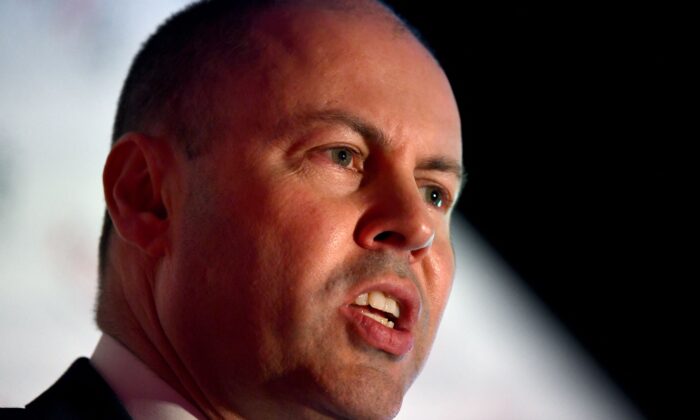 Australian treasurer Josh Frydenberg speaks during the release of the 2021 Intergenerational Report in Melbourne, Australia on June 28, 2021. (Photo by WILLIAM WEST/AFP via Getty Images)
Australia

Treasurer Josh Frydenberg is forecasting a slightly smaller budget deficit for the 2021/22 financial year while predicting strong economic recovery and a sharp fall in the unemployment rates.

He is also predicting in his mid-year budget review wages growth of three percent in 2023/24, a rate not seen since the coalition came to power in 2013.

The treasurer has also warned state governments not to collapse in concern over the Omicron variant of the coronavirus.

“We need to learn to live with the virus. There will be more variants, but there is no need to panic. There is no need to overreact, and the states need to keep calm and carry on.” Frydenberg said on Sky News on Thursday.

Gross debt is now expected to be 41.8 percent of GDP by the end of Jun. 2022 and is projected to stabilise at around 50 percent of GDP in the medium term.

New figures showed the jobless rate shrank from 5.2 percent to 4.6.

“The MYEFO shows an improvement in the fiscal outlook since the 2021/22 budget, even after accounting for the impacts of the Delta imposed lockdowns,” Frydenberg said.

“Consistent with the strong economic recovery, the unemployment rate is forecast to reach 4.25 per cent in the June quarter of 2023,” Frydenberg stated.

The review also forecasts an addition of one million jobs between Oct. 2021 to the end of 2022.

“However, these improvements could still be derailed if governments choose to overreact in the face of the Omicron variant,” he said.

“With the economic comeback from the pandemic gathering momentum, businesses and the community cannot afford a return to the disparate stop-start measures of lockdowns and restrictions.”

However, former opposition leader Bill Shorten warned that Frydenberg “might be telling Christmas fairytales about wages.”

“The last eight years, the wages have been in the toilet; they have not increased at all,” said Shorten on the Today Show on Thursday.

However, Shorten did think that there may be a bounce-back out of COVID-19.

“People have been saving some money; they’ve got money to spend,” he reasoned.

The shadow treasurer Jim Chalmers was also unimpressed, saying the review doesn’t deal with any of the key challenges facing Australia at present in matters of the economy.

“This is a mid-year budget update which has got lots of complacency, lots of self-congratulation but nothing in terms of a plan for wages or job insecurity or skills shortages,” Chalmers told reporters at the press conference on Brisbane.

“The economy is recovering despite the Morrison government and not because of it.”

Wages growth has not reached three per cent under the Coalition since 2013, despite repeated forecasting under previous Liberal treasurers.

“This is a government which is notorious for over-promising and under-delivering on wages in particular,” Chalmers said.