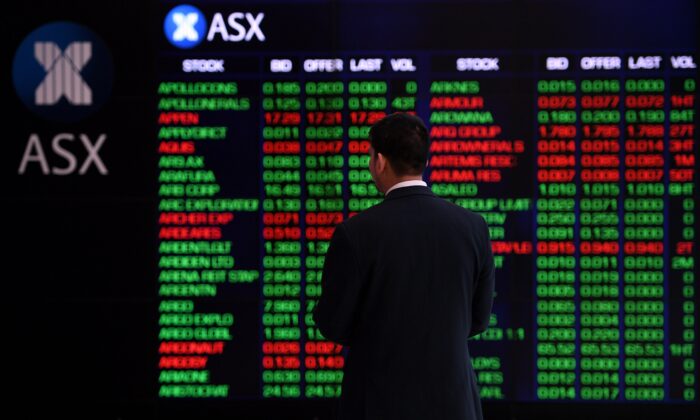 The indicator board at the Australian Securities Exchange (ASX) is seen in Sydney, Australia, on Feb. 5, 2019. (AAP Image/Dan Himbrechts)
Australia

The local stock exchange has dropped sharply, tumbling along with markets around the world after a worse-than-expected US inflation report raised the prospect of even more aggressive rate hikes in the world’s largest economy.

The global sell-off came as economists debated the odds of the Federal Reserve hiking rates by a supersized 100 basis points next week rather than moderate its hawkish stance.

Global markets had been gaining since late July based on optimism that inflation had peaked and central banks would pivot away from aggressive rate hikes.

“The market got a little bit too optimistic and read the room wrong. And now when the data comes in, the truth comes out,” Saxo Markets Australian market strategist Jessica Amir told AAP.

“So it’s not a good day—and it signifies that we could be retesting the June lows as the biggest central bank (the U.S. Federal Reserve) gets aggressive,” Amir said.

Higher interest rates are generally a negative for share markets because if decent returns are available on bonds and savings accounts, riskier equities look less attractive.

Every sector was down at least 1.4 per cent, with tech and consumer discretionary both down 3.2 percent and property falling 4.2 percent.

Lake Resources was the biggest loser among large companies, falling 16.5 percent to $1.06 after the lithium company announced it had a dispute with a joint venture partner.

The sell-off was the worst since the local market fell 246 points, or 3.6 percent, on June 14—the day after the Queen’s Birthday holiday.

That plunge was also prompted by a worse-than-expected U.S. inflation report.

Amir said the market received more bad news, with word that La Nina conditions would prevail this summer, likely meaning torrential rainfall that could wash away topsoil and diminish conditions for crops such as corn, soybeans, produce and almonds.

That could mean higher food prices in a nation already dealing with inflation.

“It’s really a double whammy today,” she said. “La Nina for the third year in a row means the RBA’s thinking about inflation peaking at eight per cent later this year is probably wrong.”

The Australian dollar, meanwhile, was close to a more than two-year low against its U.S. counterpart. It was buying 67.19 U.S. cents from 68.77 U.S. cents at Tuesday’s close.

The Aussie briefly dipped under 67 U.S. cents last week but otherwise hasn’t been so low since July 2020.