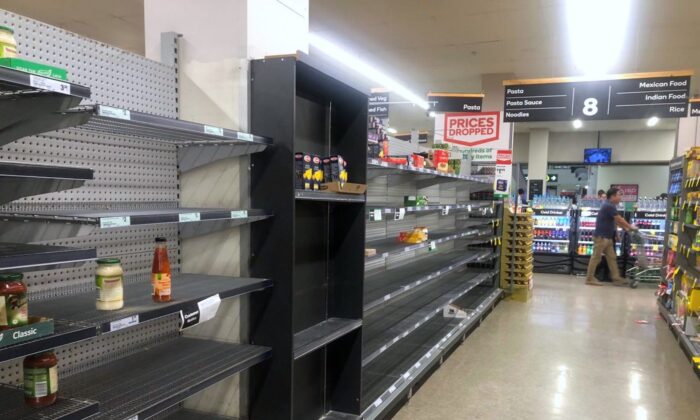 Prime Minister Scott Morrison issued what he called a blunt message to Australians amid mass panic buying due to coronavirus concerns across the country, which has seen supermarkets stripped of toilet paper, pasta, rice, and frozen food, as well as tinned and other dried goods.

“On bulk purchasing of supplies: Stop hoarding. I can’t be more blunt about it. Stop it,” he said.

“It is not sensible, it is not helpful and it has been one of the most disappointing things I have seen in Australians’ behavior in response to this crisis,” Morrison told reporters in Canberra on Wednesday.

“It’s ridiculous, it’s un-Australian, and it must stop.”

“That is not who we are as a people. It is not necessary. It is not something that people should be doing. What it does is it is distracting attention and efforts that need to be going into other measures, to be focusing on how we maintain supply chains into these shopping centers.”

Morrison also waved off fears of a possible lockdown that exacerbated grocery shoppers’ panic buying. “As I have said, we’re putting in place scalable and sustainable measures.”

“Many measures in place you have to be prepared to put in place for six months,” he later said.

Panic buying has caused stress and frustration amongst elderly shoppers, many of whom find it difficult to make frequent visits to supermarkets for essential goods. In many cases, particularly for toilet paper, the shelves are often bare.

Australia’s major supermarket chains have banded together to plead with customers to be considerate of each other and stop abusing staff.

The call made in newspaper advertisements across the country came after more footage emerged online of customers verbally attacking retail staff because they couldn’t find the goods they wanted in-store.

“So we ask you to please be considerate in the way you shop,” the ad says. “We understand your concerns, but if you buy only what you need and stick to the product limits it helps everyone, especially the elderly and people with disability. No one working or shopping in any of our stores should experience abusive or aggressive behavior.”

Aldi, Coles, IGA, and Woolworths said they were doing everything they could to get as much produce on the shelves as possible, often under difficult circumstances.

Coles on Wednesday held its first “community hour” for seniors and pension card holders from 7-8 a.m. at its stores nationwide, before opening to everyone else.

People with government-issued concession cards on Tuesday flocked to Woolworths, which implemented a similar measure, and IGA is considering whether to roll out the same.

Coles is trying to employ more than 5,000 casual workers to help restock its supermarkets quicker under a fast-tracked induction process and will hire more Coles Online delivery van drivers.

Woolworths fresh food director Paul Harker said there was no shortage of goods in Australia but it was a logistics puzzle to get products to stores in line with the pace and demand.

The prime minister has activated the Emergency Response Plan for Novel Coronavirus (COVID-19).

To find out how the Australian Government is managing COVID-19, go to Government response to the outbreak.

If you’re planning to go overseas, keep up to date with the latest advice for travellers.