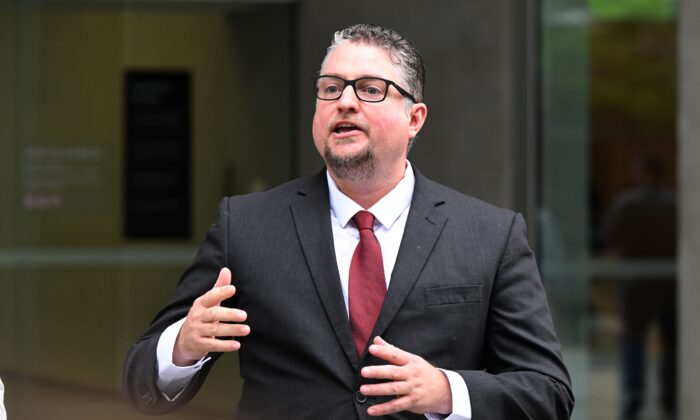 Dr William Bay is seen talking to his supporters outside the Brisbane Supreme Court in Brisbane, Australia, on Nov. 30, 2022. (AAP Image/Darren England)
By Alfred Bui

Alfred Bui
Alfred Bui is an Australian reporter based in Melbourne and focuses on local and business news. He is a former small business owner and has two master’s degrees in business and business law. Contact him at alfred.bui@epochtimes.com.au.
View profile
biggersmaller
Print

An Australian general practitioner who was suspended for saying COVID-19 vaccines are dangerous has taken court action against the country’s medical regulators to regain his registration.

North Brisbane GP registrar William Bay got his registration suspended on Aug. 17 after he interrupted a national Australian Medical Association conference in late July and told the doctors present to stop forcing vaccines on people.

Following his suspension, Bay filed a lawsuit against the Australian Health Regulation Practitioner Regulation Agency (AHPRA) and the Medical Board of Australia.

At a Brisbane supreme court’s directions hearing on Nov. 30, Bay, who represented himself, told the court that he should not have been deprived of his registration due to several reasons, one of which was the medical regulators did not have a valid legal existence as a national authority.

“(The AHPRA and the Medical Board) are purported to be of a national character, and yet their basis for authority is formed by Queensland statute and therefore cannot be of Commonwealth character,” Dr Bay said in comments obtained by AAP.

“This review cannot proceed until the threshold issue of jurisdiction is resolved, which is the validity of the national law conducted and legislated into Queensland.”

Bay then stressed that his case was all about his freedom to speak and said he had informed the Human Rights Commission about his right to hold a religious belief regarding the safety of COVID-19 vaccines.

“The constitutional validity of my freedom to speak has been unsatisfactorily burdened by the operation of national law and impermissibly burdened my right to political communication,” he said.

At the same time, the doctor also asked the court to grant him an interlocutory order allowing him to seek employment unrelated to his role as a medical practitioner.

News.com.au reported that in his court application, Bay said the suspension had significantly impacted his right to work and earn a living in the medical profession.

He also stated that the AHPRA and the Medical Board were using the compliance letter to regulate his employment outside of his registered profession and to stop him from working in the healthcare sector.

Justice David Boddice told Bay that the purpose of the first directions hearing was to establish what materials the parties had to provide each other and determine the date of the next hearing.

He also turned down Bay’s request to broadcast the future hearings as a matter of “national public interest.”.

“The court does not broadcast proceedings. If someone is interested, they can walk through the door and listen,” Boddice said.

Regarding the hearing schedule, the judge said the next two-day hearing would take place at an available time after March 17.

After the first hearing concluded, Bay told his supporters he was pleased that the court allowed him to challenge the validity of the health regulators.

“It is my allegation that they are impersonating the Commonwealth. Queensland does not have the legal authority to administer a national accreditation and registration scheme,” Bay said in comments obtained by AAP.

“I am alleging they are a fictitious and fraudulent entity…I take this as a big win for the freedom of Queenslanders and all Australians.”

Bay attracted the attention of the public in late July when he live-streamed an Australian Medical Association conference on social media, in which he interrupted a speaker and told the attendees to “join with the people of Australia and stop forcing these vaccines on people who are getting killed by them.”

He also told the doctors present that Chief Medical Officer Paul Kelly was a “liar” and that he was gaslighting them.

At one point in the live-stream video, the registrar was heard citing research that COVID-19 only had a fatality rate of 0.27 percent and natural immunity had been proven to provide 97.3 percent immunity for life against all variants.

He also warned the doctors that they were on notice by the people of Queensland.

“This is the Queensland people’s protest, and you have been warned,” he said in the video.

Shortly after this, Bay was escorted out of the conference building by security guards while other guests started leaving.

On Aug. 2, Bay received a notice from AHPRA which proposed to suspend his registration as the organisation believed he posed serious risks to persons and that it was “necessary to take immediate action to protect public health or safety.”

“The statements by you, as recently as June 2022, have the potential to undermine public health directives and positions in relation to the Covid-19 vaccine,” the notice reads.

“This conduct is of significant concern in circumstances where you appear to be relying on your position as a registered health practitioner to lend credibility to your position.”

In a recorded interview with Australian Doctor magazine, Dr Bay said he was not concerned that AHPRA would take action.

“If AHPRA wishes to censor me for speaking the truth, then that would show their hand as an agency that’s not committed to protecting the interest of the Australian people,” he said.

“What I am concerned about is doing the right thing by my patient. And I believe that is standing up for their medical freedom, their sovereignty of medical choice and making sure that they’re aware that there are disadvantages and side effects to these mRNA vaccines.”

AHPRA later went ahead with the proposal and suspended Dr Bay’s registration on Aug. 17.

Alfred Bui
Alfred Bui is an Australian reporter based in Melbourne and focuses on local and business news. He is a former small business owner and has two master’s degrees in business and business law. Contact him at alfred.bui@epochtimes.com.au.