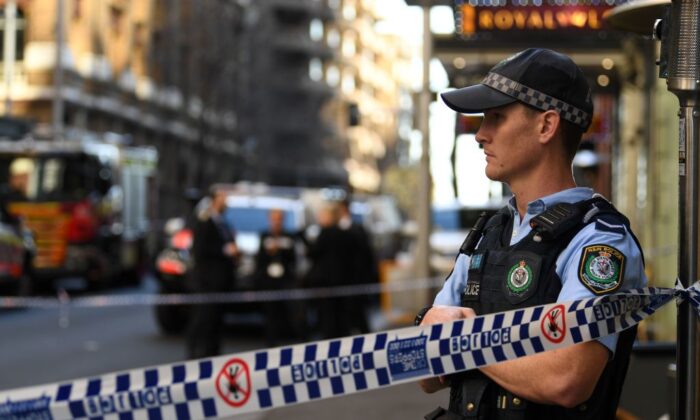 Crime figure Bilal Hamze was gunned down in a hail of bullets in Sydney CBD by multiple persons in a black Audi on June 17, 2021 in Sydney, Australia. (Photo by Saeed KHAN / AFP via Getty Image)
Australia

Australian crime boss Bilal Hamze was gunned down “in a hail of bullets” in the heart of Sydney’s central business district in what police say was a “brutal, execution style murder.”

Multiple gunmen opened fire on the 34-year-old on Thursday night on Bridge Street, near Circular Quay and fled the scene in a black car.

After the shooting, the police found a burnt-out black Audi on Fleming Street in Northwood on Sydney’s Lower North Shore.

No members of the public were injured in the incident.

Detectives are investigating whether the attack could be part of an ongoing feud between Sydney rival families, or the result of arrests last week under Operation Ironside, an international sting targeting drug and firearms traffickings.

NSW Detective Superintendent Danny Doherty said the hit appeared to be well-orchestrated: “It obviously looks that way. Someone knows where he was at that time to be in that same spot and fire a number of shots and kill him.”

“One of our lines of inquiry is how they knew where he was.”

Doherty believed it is a “major escalation” of Sydney’s gangland war linked to a dispute between the Hamzy and Alameddine clans of Sydney’s southwest.

In October 2020, Bassam Hamzy’s brother and Hamze’s cousin Mejid Hamzy died after being shot multiple times outside his home in Condell Park.

On the same day, Hamze’s mother Maha Hamze’s home was also peppered with bullets. In March 2013 she was shot in the legs and hips through the door of her home in her Auburn home in Sydney’s west but survived.

“It’s a major line of inquiry,” Doherty said. “But we have to keep an open mind.”

NSW Police Criminal Groups Squad Commander Robert Critchlow confirmed there was a contract on Hamze’s head but the gangster disregarded the warning from police.

“He’s been warned that he was at risk,” Critchlow said. “That advice was not received in the sense it was given, he sought to live his life the way he wanted to do and he’s made some choices.”

“Ultimately, if a violent criminal group wish to use violence towards another person to achieve their aims, they will do it.”

Police also predicted the shooting could be related to the fallout of Operation Ironside’s smashing criminal networks across Australia.

“Once you disrupt organised crime networks, there is always going to be some irritation and this may have been a result of that,” Doherty said.

“I’m not saying if it is or not but you have to look at those things.”

There are some possibilities of retaliation attacks, but police said more arrests will be made.

“We will be opening doors, kicking down doors, tipping people over,” Critchlow said.

“It will not be business as usual for the criminal fraternity in Sydney after today.

Well-known crime figure Bassam Hamzy, Hamze’s cousin, is currently locked up in Goulburn jail. He founded Brothers 4 Life after converting to radical Islam and was charged earlier this year in relation to the execution of teenager Braden Dillon in 2017.