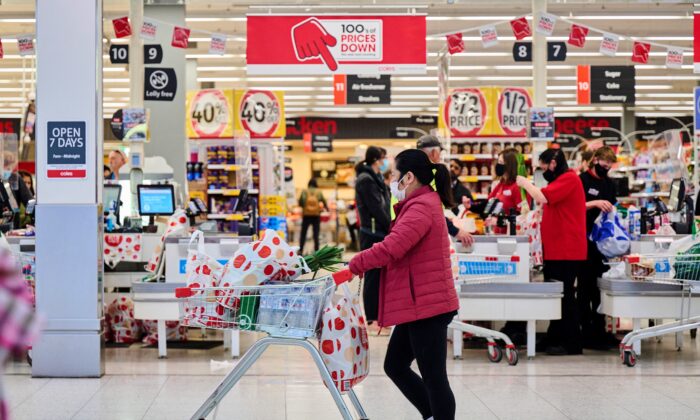 Residents shop at a supermarket in Canberra, Australia, on Aug. 12, 2021. (Rohan Thomson/AFP via Getty Images)
Australia

As cost of living increases in the lead up to Australia’s federal elections in May Prime Minister Scott Morrison has focussed debate on the economy.

The situation comes as Opposition Leader Anthony Albanese was ranked similar to Morrison as the preferred prime minister, with Labor outpacing the Coalition 55 to 45 percent to become the preferred party in the latest Newspoll.

More specifically, both leaders scored 42 percent for preferred prime minister as of March 13, with Albanese gaining two percentage points compared to two weeks earlier. The remaining 16 percent of respondents did not commit to any leaders.

While campaigning in the marginal seat of Dobell on the central coast of New South Wales, the prime minister said that the proper management of the economy would play a vital role in alleviating living cost pressures.

“This next election is about a choice, about our economy and how we can best manage our economy to manage a better future,” Morrison told reporters on March 14.

“These cost of living impacts are real, and the Australian government understands that.”

Living costs have regained the limelight in the election debate as a result of a rapid hike in petrol prices after Russia invaded Ukraine.

Skyrocketing fuel costs are hurting Australian families as petrol prices jumped around 50 cents to $2.2 a litre (US$5.98 a gallon) in recent weeks.

In addition, the prices of many items on supermarket shelves are expected to increase by 10 to 20 percent, including but not limited to SPC baked beans and spaghetti, Ardmona canned tomatoes and Goulburn Valley fruits, as manufacturers are experiencing sharp rises in input costs.

Meanwhile, the Coalition has placed high importance on winning the Dobell seat which is currently held by Labor’s Emma McBride on a margin of 1.5 percent.

Cardiologist Michael Feneley, a new candidate selected by the Coalition, joined hands with the prime minister in campaigning for the seat.

At the same time, Albanese was running a political campaign in Queensland’s electorate of Herbert, a Coalition-held seat with an eight percent margin.

Although the opposition leader surpassed Morrison in most character traits in the recent Newspoll, he said it was still very challenging for his party to win the election.

“We know that it’s a mountain to climb for Labor to win office from opposition. We’ve only done it three times since the Second World War,” he said.

“It’s really tough, and if anyone takes a lesson from the last 2019 campaign, it’s that you shouldn’t worry about polls before election day.”

Albanese said he would be focusing on cutting down living costs in his political campaigns.

“At the moment, families are under massive pressure. Everything is going up … except people’s wages, which is why people are really, really struggling,” he said.