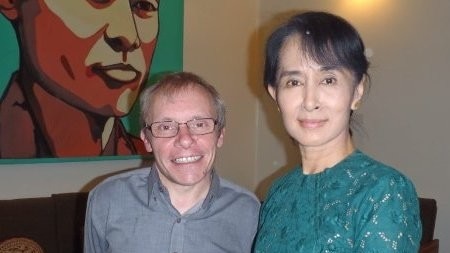 An Australian academic and former economic adviser to deposed Burmese leader Aung San Suu Kyi has testified in a closed military court for the first time this week.

Sean Turnell was on trial for violating Burma’s official secrets law, which carries a maximum prison sentence of 14 years. He had been detained for 18 months since the military ousted Suu Kyi’s elected government on Feb. 1, 2021.

Turnell has testified for the first time and pleaded not guilty. But further details on his trial were unavailable as his lawyers were barred from discussing the case.

Australian Acting Prime Minister Richard Marles expressed concern at the case’ handling but was unable to provide details regarding the consular assistance provided to Turnell.

Marles called on the Burmese military to release Turnell, adding that Australia’s government won’t stop advocating for him until he is safely returned.

“Our concern in terms of our engagement with Myanmar is to ensure the safe return of Professor Turnell to this country,” he added.

Turnell is a highly regarded academic from Sydney’s Macquarie University and was director of the Myanmar Development Institute in its capital Naypyitaw. His wife Ha Vus has stood by him, writing on social media he had done nothing wrong.

He has been vocal in his criticism of the Burmese military, which he believes is resistant to change and has become an entrenched influence in the public service.

Australian Prime Minister Anthony Albanese said in June that the military regime’s treatment of Turnell was unjustified and called for his release.

“We’ll continue to make strong representation on that basis. What we’ve seen is unjustified, and we see in Myanmar a trashing of human rights and of proper legal processes,” Albanese said.

“Sean Turnell will continue to receive the full support of the Australian government for appropriate processes to take place. But he should be released,” he added.

Meanwhile on April 27, 2022, a Burmese court has ruled that Suu Kyi will spend five years in jail after allegedly finding her guilty of 11 counts of corruption, according to Reuters. She was charged with at least 18 offenses which carry a combined prison sentence of 190 years.