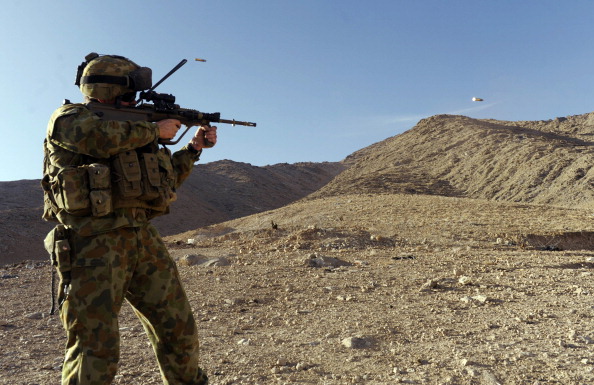 This file photo taken on January 20, 2010 shows an Australian soldier of the Omlet-c Company taking part in practice shooting at the forward operating base in southern Oruzgan province in Afghanistan. (Deshakalyan Chowdhury/AFP/Getty Images)
World

Australia Prime Minister Julia Gillard said on Tuesday that her country’s troops would completely withdraw from Afghanistan one year earlier than originally planned.

The majority of the 1,500 Australian soldiers deployed in Afghanistan would be sent home by 2013, she said.

Gillard said that she would present a plan for the withdrawal to a NATO summit in Chicago in May.

“I’m now confident Chicago will recognize mid-2013 as a key milestone in the international strategy. A crucial point when the international forces will be able to move to a supporting role across all of Afghanistan,” she said, according to a transcript.

The main role of Australian soldiers in Afghanistan is training the country’s army and security forces to ready them to take over responsibility for security at the end 2014, the agreed-upon deadline for foreign troops to leave the country.

Gillard, however, said that Australia should be able to leave sooner due to the increase in security measures and the lessening of attacks carried out by insurgents.

The withdrawal would begin as soon as Afghan President Hamid Karzai announces that his forces are capable of assuming responsibility over the security in Oruzgan Provice, where the majority of Australia’s troops are stationed, she said. Karzai is expected to make that announcement later on this month.

And once Karzai makes the announcement, it “should take twelve to eighteen months” for Canberra to withdraw the forces, Gillard said.