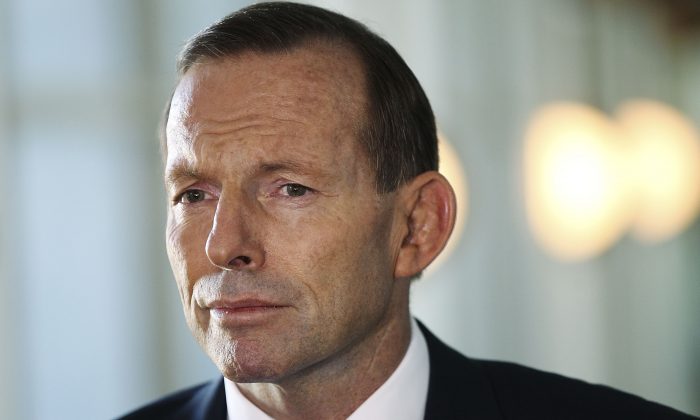 While Mr Abbott’s commitment to supporting new parents has been welcomed, advocates are apprehensive about the costs to the community and the budget.

Professor Kerry Brown, a specialist in industrial relations and public policy at Western Australia’s Curtin University, has advocated for the PPL for years so she is supportive of the idea. However, she has reservations about Mr Abbott’s proposal.

“It is expensive and is not necessarily going to provide parental leave for those who need it most,” she said in a phone interview. “I am a bit torn actually.”

Australia already has a Labor-introduced paid maternity leave, which pays 18 weeks at the minimum wage (around $11,200 before tax). Dad and Partner Pay allows for 2 weeks of government-funded paternal leave, also based on the minimum wage.

The Coalition’s proposed PPL is more generous – it provides 26 weeks of parental leave at full pay, capped at $50,000 for women earning $100,000 or over. Fathers will be eligible for two of the 26 weeks for paternity leave at similar rates of pay.

The proposed scheme will cost an estimated $5.5 billion, with the Government pledging to contribute $100 million to pay for public servants. The scheme will be funded in part by a 1.5 per cent levy on income from businesses with an annual income above $5 million.

Businesses, many that already have PPL, have questioned the levy but the Government has said costs will be mitigated by tax cuts.

Professor Brown said while the scheme should be applauded, there are reasons to be apprehensive about its wider impact.

“Women shouldn’t have to drop too much income in order to have a child,” she said. However, the inequities of the scheme are problematic; women who are already doing well in high level jobs will benefit, while “women who need income replacement are not going to get it,” she said.

Additional budget cuts in the areas of education, welfare, unemployment and the national disability scheme will cost the community sector. “So there are a whole lot of inequities it will create,” she said. “It is a very expensive system.”

Other concerns include the threat to remove employer PPL schemes – the present scheme is paid in addition to employer PPL arrangements.

“In a surprising step, the Commonwealth proposes to use the social services powers in the Australian Commonwealth Constitution to override private employer contracts as well as industrial agreements”, wrote Marie Coleman, chair of the National Foundation for Australian Women Social Policy Committee on The Drum.

There is also evidence that affordable childcare is a broader, more effective and equitable approach than PPL to maintain women’s participation in the workforce, according to a recent report by the OECD.

Politically the scheme has been contentious; the prime minister has received flak from members of his own party who complained it sent the wrong message at a time of austerity.

A number of Coalition MPs spoke out in October this year saying the PPL should be shelved until the economy is stronger. “It’s just one of those things that is unaffordable,” Federal MP George Christensen told Fairfax Media.

Labor has also opposed the scheme, with opposition spokeswoman for families and payments Jenny Macklin declaring it “fundamentally unfair”.

“This is taxpayer’s money,” she said and noted a report from the Productivity Commission which recommended that a flat rate, minimum wage payment “as the fairest and most effective paid parental leave scheme”.

Support for the scheme

Those who support the scheme include recognised feminist and social researcher Dr Eva Cox. She argues that the scheme meets feminist demands for a PPL including replacement income and six months leave.

Dr Cox says if the scheme would be a win for women if it was tweaked to ensure women were able to return to the same job and created more flexibility for low income earners on casual jobs.

“Paying a form of parental leave that both covered these anomalies and replaced income for nearly all women would be a significant progression for Australia,” she writes in an article published on The Conversation.

Dr Cox suggested that Mr Abbott’s history of sexism may be contributing to the criticisms, rather than the scheme itself, and that critics may be missing an opportunity to change workplace culture.

“Starting with a clearly work related paid parental scheme would be one further step in that direction. Even if it is Tony Abbott offering it,” she wrote.

Mr Abbott had also opposed compulsory paid parental leave as Workplace Relations Minister during former prime minister John Howard’s term. It would happen “over this Government’s dead body”, he told a Liberal Party function in 2002. Today however he is adamant that the PPL will stay.

Amid growing criticism from within his party, election losses for the Coalition Napthine Government in Victoria and confusion over the $7 GP co-payment, Mr Abbott on Dec 1 reiterated his commitment to the PPL, albeit with minor changes.

“Do you think if I were to change the paid parental leave scheme that there wouldn’t be screams of broken promise?” he said.

“What tweaks might possibly occur will depend very much on the course of discussions with the Senate early in the new year.”

Professor Brown said she was “mystified” by Mr Abbott’s commitment but was clear about what might benefit women.