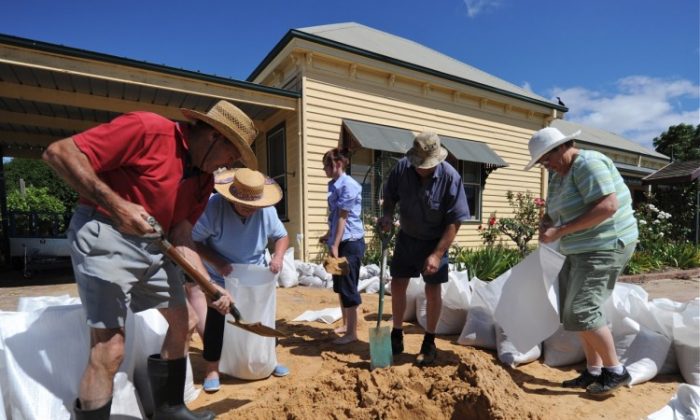 File photo of members of the Dumesny family fill sand bags to protect their home from the rising flood water in the Victorian town of Horsham last summer during heavy rains. (Mark Ralston/AFP/Getty Images)
US

Australia is on red alert, as floods continue to ravage parts of Victoria, the Northern Territory and three quarters of New South Wales, with some areas reporting the heaviest rains in over 80 years.

The Special Emergency Services (SES) said about 800 residents in Sydney’s far west are expected to be flooded today, with major roads and bridges at the suburbs of Windsor and North Richmond submerged.

Warragamba Dam, the main water reservoir that feeds Sydney, is expected to overflow today as heavy deluges persisted through the night. The dam has not been at full capacity for over 14 years.

“We initially thought the dam would spill earlier, but there was a slight reduction in rain in the catchment—we were expecting more than 140,000 megalitres to flow into the dam before 10pm, but it now looks like that will be 130,000 megalitres,” Sydney Catchment Authority spokeswoman Karen Smith said, according to The Telegraph.

Millions of litres of rain have fallen in the last three days. The SES said it had responded to more than 100 calls for help and 22 flood rescues on Thursday night. More than 1600 people have been forced to evacuate their homes in Goulburn, Cowra, Cooma and Bega since Tuesday.

Victoria has also not been spared, as SES is reported to be preparing 30,000 sandbags to combat the damage.

Of most concern were the areas of Yarrawonga, Beechworth, Yackandandah, Myrtleford, Bright and Mt Beauty—that had already been drenched with up to 200mm of rain this week.

Mt Buffalo had a whopping 125mm of rain yesterday, causing a mudslide which trapped 30 people.

Meanwhile, the central outback areas have also received unusually high rainfall, forcing road closures. Some areas in Central Australia had had more than 100mm of rain in the past two days. Typically, the Alice Springs district receives about 286mm a year.

Australia’s east coast has been under the influence of higher ocean temperatures, which has increased the amount of evaporation in recent months.

Weather Channel meteorologist Tom Saunders is reported as saying that the Indian Ocean has been steaming over 3oC higher than normal. This has saturated the atmosphere with moisture, triggering heavy rain and flooding.