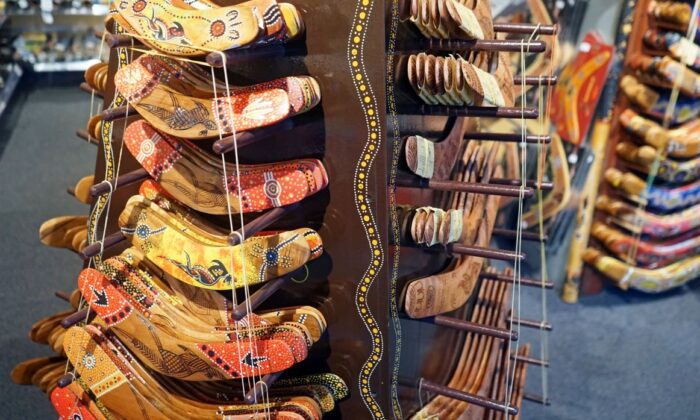 Australia Needs to Crack Down on Fake Indigenous Art: Report

Visual arts and crafts have been an integral part of Australian Aboriginal and Torres Strait Islander culture for tens of thousands of years, and while in recent years, this has grown into a significant industry, providing income for artists and creating opportunities for Indigenous communities, fake Indigenous art is undermining these benefits and new measures are needed to address the problem, according to a new draft report.

The Australian Productivity Commission’s Aboriginal and Torres Strait Islander Visual Arts and Crafts draft report—released on Tuesday— states that Indigenous-style consumer products not created by Indigenous Australians are a widespread and longstanding problem.

“They disrespect and misrepresent culture and, by misleading consumers and denting confidence in the market, they deprive Aboriginal and Torres Strait Islander artists of income,” the report says.

While total sales of Australian Indigenous visual arts and crafts was around $250 million (US$169 million) in 2019-20, inauthentic products accounted for well over half of spending on Aboriginal and Torres Strait Islander souvenirs over the same period.

Arts minister Tony Burke said on Tuesday that fake ‘Indigenous-style’ art is popular in the souvenir and tourist stores across the country, with items such as paintings, boomerangs, didgeridoos, and T-shirts typically mass produced in places like China and Indonesia with no Indigenous involvement.

The draft report recommends the mandatory labelling of inauthentic products to raise consumer awareness and enable them to distinguish between authentic and fake items.

In addition, as some visual arts and crafts use Indigenous Cultural and Intellectual Property (ICIP) such as sacred symbols without the consent of traditional custodians, and considering the current legal protection of ICIP is “patchy”, the report suggests implementing a new law that strengthens the protection of ICIP used in visual arts and crafts.

This would formally recognise the interests of Indigenous communities in their cultural assets, promote respectful collaborations, and enable legal action where protected cultural assets are used in arts and crafts without the authorisation of traditional custodians.

The report also recommends additional support for art centres and other organisations that provide essential services to artists, as well as an independent evaluation of government funding to the sector undertaken in consultation with Indigenous Australians.

Indigenous Australians minister Linda Burney said on Tuesday that the government is committed to drawing on the report findings and working with Aboriginal and Torres Strait Islander peoples to strengthen authentic and ethically produced Indigenous arts.

“I welcome today’s draft report and thank the Productivity Commission, government agencies and Aboriginal and Torres Strait Islander peoples for their work in developing these comprehensive recommendations,” she said.

A consultation period during which the sector can provide feedback on the draft report’s recommendations is open until the end of August, with a final report to be released in late 2022.