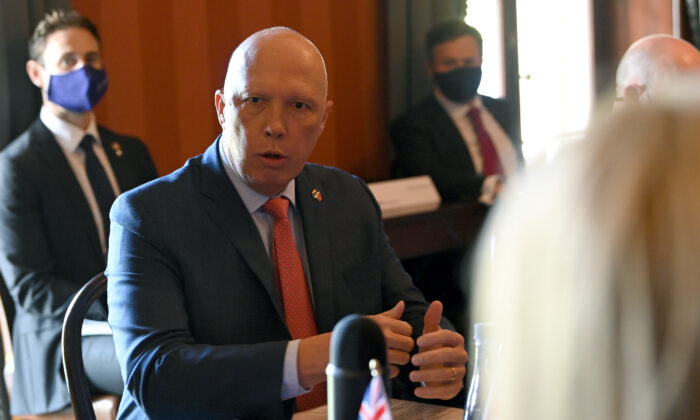 Australian Defence Minister Peter Dutton has warned against the imposition of a no-fly zone over Ukraine, saying such a move would only help “if it didn’t lead to a nuclear conflict.”

The comment follows Ukrainian President Volodymyr Zelensky’s criticism of NATO for refusing to create a no-fly zone to stop Russia’s escalating attacks from the air, which he said gives “the green light to the bombing of Ukrainian cities and villages.”

Speaking on ABC’s “Insiders” program on March 6, Dutton argued that a no-fly zone, which would ban unauthorised aircraft from flying over Ukraine, “would bring catastrophic results not only to Europe but to the whole world.”

“The difficulty here is if you provide more support and surge with troops … or you allow planes to be staged out of Poland or somewhere else, what is the next step, and what is Putin’s next play?” Dutton said.

“He is holding out slightly veiled language, the threat of stepping up a nuclear conflict, and that would be really catastrophic for Europe and the world.”

Russian President Vladimir Putin previously warned that Russian authorities consider any Western effort to impose a no-fly zone over Ukraine as “participation in an armed conflict.”

Putin has also likened any economic sanctions on Russia to “an act of war” and told Ukraine’s leaders that their nation will be blamed for risking “the future of Ukrainian statehood” if they continued to resist Russia’s demands.

Dutton noted that Australia’s intelligence analysts, Ukraine, NATO, and the rest of the world share the same concern that Putin “has a view of erasing history and of conquering those countries around him and bringing back a reunified USSR.”

“We need to be very clear about his intention, his capability. I think he has been significantly wounded out of this, both domestically and in terms of the international reputation that people have of Russia, and I think there will be internal discussions about the viability of his leadership going forward.”

He applauded Ukrainians for putting up a “magnificent resistance so far,” but added that there is a “sense of inevitability” for Putin to escalate his attacks in Ukraine.

“When you look at the sheer numbers and also the propensity for Putin to use chemical weapons or other weapons which would be used in a residential area, you just can’t imagine it, it would be a war crime,” he said.

Dutton said that if the Chinese Communist Party follows Russia’s behaviour and invades Taiwan, Australia doesn’t rule out the possibility of going to the defence of Taiwan.

“We want peace to prevail in our region. But you don’t have that peace if you’re arguing from a position of weakness.”