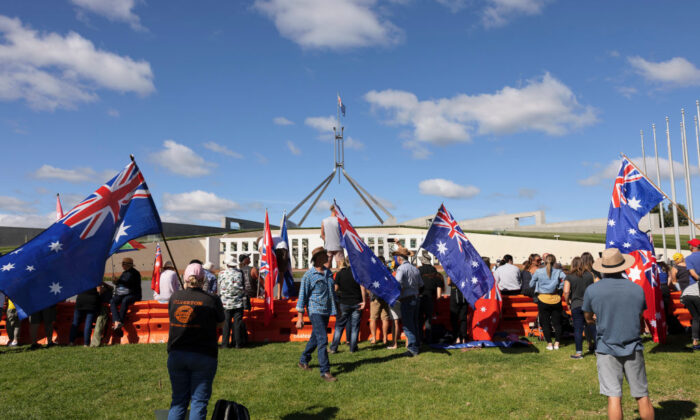 Australia, a Country Divided by Mandates

The imposition of vaccine mandates in Australia has divided the country between proponents and opponents of compulsory vaccination. This division has spawned a wave of demonstrations against unrelenting government demands to get vaccinated.

On Feb. 5, an anti-vaccination rally was held outside the Old Parliament House in Canberra. The rally supported the “Convoy to Ottawa,” a prominent protest action in Canada that opposes mandates.

These vaccine mandates, which are enthusiastically supported by the political elites of both major parties and the medical establishment have robbed people of the freedom to make decisions themselves regarding their own welfare. The mandates are part of a fragmented array of emergency measures which are imposed upon people and enforced in an overbearing manner.

The unvaccinated are subject to discriminatory treatment and banned from most public venues, including court houses, making it difficult to mount a legal challenge to vaccine mandates.

This unfortunate divide has been characterised by the different stances recently taken by the CEO of Qantas, Alan Joyce, and the Prime Minister, Scott Morrison.

Joyce controversially stated that Western Australia (WA) was beginning to look like North Korea. His controversial statement was in response to the continued closing of the borders of the state, which has disastrous consequences for the tourism and hospitality industries.

He lamented the fact that people can travel to London, but that they cannot “even travel around their own country,” thereby indicating that there must be something wrong with our federation.

Joyce admitted that the border was going to be closed indefinitely at this stage “unless we have a plan to start living with COVID and opening up to the rest of the country.”

Joyce’s comparison of WA with North Korea is an inopportune figment of his imagination and an example of palpable exaggeration, but it is an undeniable sign of frustration.

The Premier of WA, Mark McGowan, gave an undertaking to open the border on Feb. 5.

However, when reneging on his promise, he indicated that it would be irresponsible to open the border on that date because Omicron had spread throughout the eastern side of Australia and could easily overwhelm the capacity of his state’s medical facilities.

An equally acceptable explanation of the decision to defer the border opening is that it was politically expedient to do so. In any event, the premier’s about-face reflects badly on our federal system.

Joyce’s statement sits uncomfortably with the contradictory statements of the Prime Minister, Scott Morrison, who in a radio interview on 6PR confidently contended that McGowan was right to defer the border opening and that he supported this decision.

Specifically, when the interviewer, Gareth Parker, asked whether the premier did the right thing by deferring the planned border opening, the prime minister answered “Yeah, I think he did” and that it was “the premier’s call … he has to make that decision based on what he thinks his health system is ready to absorb” and that “at the end of the day, McGowan is going to make that call and we’ve been supporting him.”

The views expressed by Joyce and Morrison disclose different and mutually exclusive interests. Joyce was obviously concerned about the effects of the continuing border closure on tourism and Qantas’s desire to restart its flights to WA.

In contrast, the prime minister may have expected to politically benefit by declaring his support for McGowan and his decision to keep the border closed.

The WA electorate, in an election held in March 2021, obliterated the Liberal Party and the prime minister probably hoped that the electorate would welcome his comments and that his endorsement of the premier’s decisions would be translated into support for the Liberal party in the coming federal election, likely to be held in May 2022.

However, the prime minister’s approach, unless he genuinely believes in the salutary effects of the border closure, reveals a lack of political nous, and abandons any pretences to political courage and principled decision-making.

This is because the federal government is responsible for the cannibalistic decisions which have been taken by the premiers of the states in their fight against COVID-19.

The reality is that the Commonwealth has the constitutional power to impose a unified, national approach on all Australian states and territories to avoid the balkanizing effect of inconsistent and draconian state emergency measures.

A national approach would have eliminated border closures, and potentially limited lockdowns, while avoiding the expensive and painful consequences for the tourism and hospitality industries, among others.

This unified national approach could easily have been supported by the external affairs power of the Commonwealth Constitution. Indeed, section 51 of the Constitution enables the federal parliament to make laws with respect to “external affairs,” a notion which has been liberally interpreted by the High Court.

It allows the parliament to make laws with regards to any matter, the subject of an international convention or treaty that Australia has ratified or is involved in.

The Commonwealth has ratified or signed innumerable international conventions and instruments, and these would have supported the constitutionality of national measures to combat the COVID-19 pandemic.

In addition, section 51 also gives legislative power to the Commonwealth parliament to make laws with regards to “quarantine”; this power has not been relied upon by the Commonwealth during the pandemic.

The prime minister’s establishment of a National Cabinet also discloses a reluctance of the elected government of Australia to make the tough decisions. The Cabinet is not mentioned in the Constitution.

In farming out power to the states, the government is in fact abdicating its legislative role, and transferring its decision-making power to its political opponents.

As a result of the federal government’s abdication, Australia’s population has experienced oppressive measures, which replicated the worst excesses of the People’s Republic of China, with border closures, lockdowns, innumerable emergency orders, while all the time instilling fear in people.

This fear was nourished by the media that incessantly reported on the alleged dangers associated with the virus and the deaths that resulted from infections. Alternative ways to treat the disease were never really considered nor tolerated by the political and medical mandarins.

The vaccine mandate and its associated coterie of emergency measures may well have irrevocably transformed Australia into a divided country. An inability to freely travel in our own country is an example of this division.

It is time for the border of Western Australia to open to rest of the country.