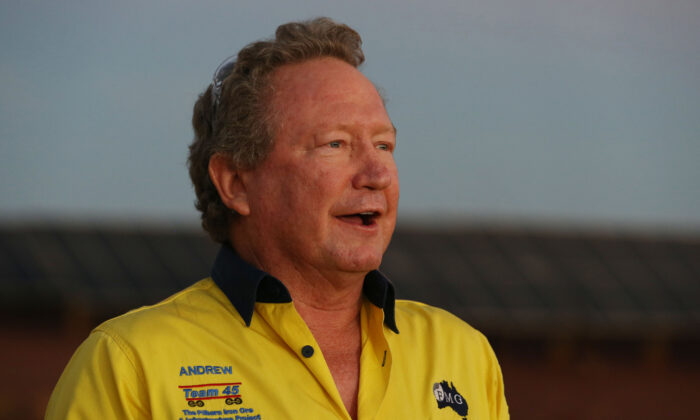 Fortescue Metals chairman Andrew Forrest during a visit to the Christmas Creek mine site in The Pilbara, Western Australia on Apr. 15, 2021. (AAP Image/Pool, Justin Benson-Cooper)
Australia

Forrest announced his company’s “decarbonisation strategy” during a CEO roundtable on “Business leadership to rescue the Sustainable Development Goals” in New York City.

The event was part of U.S. President Joe Biden’s First Movers Coalition, which was also attended by the secretary-general of the United Nations.

Decarbonisation is understood as reducing or stopping the emission of carbon gases, especially carbon dioxide (CO2).

Under the plan, Fortescue Metals Group aims to remove three million tonnes of CO2 emissions per year, according to its press release on Sept. 20.

Forrest noted the investment would generate “attractive economic returns,” including net operating cost savings of US$818 million a year from 2030, at prevailing market prices for diesel, gas and Australian carbon credits.

The billionaire said in the press release, “there’s no doubt that the energy landscape has changed dramatically over the past two years, and this change has accelerated since Russia invaded Ukraine.”

Fortescue is “moving at speed to transition into a global green metals, minerals, energy and technology company,” he noted.

“This investment in renewable energy and decarbonisation is expected to generate attractive economic returns for our shareholders through energy cost savings and a sharp reduction in carbon offset purchases, together with a lower risk cost profile and improvement in the integrity of our assets.”

As energy companies— including Fortescue, BHP and Rio Tinto—embark on the race to phase out fossil fuel, some have raised concerns about the unintended consequences of decarbonising the built environment.

A UK study published in 2012 warned that the move to decarbonise could lead to fuel poverty, eventually resulting in high fuel prices. It also said that the increase of renewable energy technology such as solar panels would mean “moving energy generation into urban areas and hence potentially intensifying the urban heat island.” Additionally, with green hydrogen being considered a significant part of Fortescue’s renewable shift, questions have been raised about the resources that go into producing green energy.

As such, Australia only has a couple of green hydrogen pilot plants that produce a mere drop in the ocean of usable hydrogen.

Australian oil and gas engineer Peter Castle argued in an op-ed on The Epoch Times that green hydrogen “is only ‘green’ because of a technicality; in reality, the electricity comes from the grid, so it is not 100 percent renewable.”

“Green hydrogen requires green electricity sources, which in most plans involves enormous solar farms full of non-recyclable solar panels which take years to offset the energy used to make them in the first place. Blue hydrogen, in the immediate term, would probably be more green than green hydrogen, so to speak,” he wrote on Sep. 5.

He also questioned whether the shift to renewables would require a large-scale rebuild of the whole system, which would affect the electricity price, cost of living, Australia’s productivity and competitiveness.

“The answer to that is not clear,” he wrote on July 19. “We are replacing coal with technology that currently doesn’t exist in the system at all, it requires immediate action. But they are relying on a lot of predictions being true at once.”

“Replacing generation capacity with storage capacity is good in theory, but the required storage volumes are staggering, and the choice of technology that may achieve it is unclear.”

“The most obvious risk is that we decommission all our existing technology that is proven and replace it with the new technology needed to maintain dispatchable capacity only to find it fails.”