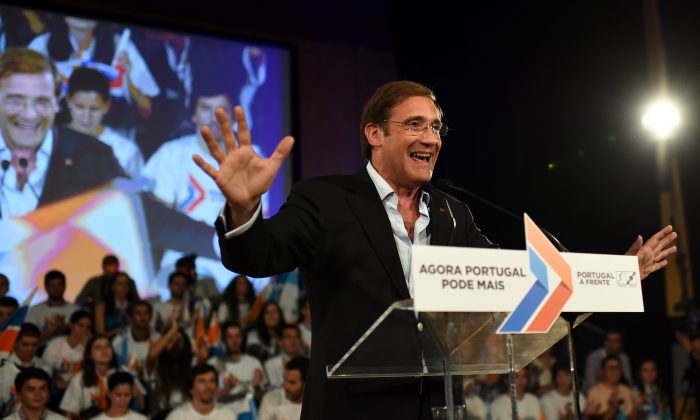 There is an air of calm in Portugal. Like Greece and Spain, Portugal was bailed out by international creditors and underwent austerity measures that included tax hikes and salary cuts across the public sector. But the political effect of this has been starkly different.

Greece has had five general elections in the past six years and seen the rise of the left-wing, anti-austerity Syriza party. Spain too has seen a surge in popularity of the ideologically-similar Podemos. Portugal, meanwhile, has enjoyed significant continuity.

As the country’s Oct. 4 general election approaches, the center-right ruling coalition of the Social Democrats and Christian Democrats, which has overseen the implementation of austerity and structural reform, has begun to stretch out ahead in opinion polls over the main opposition center-left Socialist Party. This has been a huge turnaround since January when the Socialist Party had a significant lead.

One factor that has played a central role in the stability of Portugal’s electoral outlook has been the condition of the economy. It is without question that the austerity prescribed with their bailout and the recession that subsequently followed hit ordinary people hard in Portugal. But, as the graph below shows, it did not have such a dramatic effect on GDP as it did in Greece which lost 25 percent of GDP between 2008 and 2014.

Spain, while not experiencing as large a contraction in overall GDP compared to Greece (or Portugal), did suffer a huge downturn in the construction sector. This was felt particularly hard as it followed an equally impressive boom, which was both important in terms of economic output and employment—as shown in the graphs below.


A longer view of Portugal’s economy explains further why it did not experience hardship as a result of its austerity policies and bailout as harshly as Greece or Spain. Portugal did not enjoy the same upswings that the Spanish and Greek economies did before the financial crisis. Indeed, Portugal’s accession to the euro very quickly choked off the high growth the country had from the mid-to-late 1990s.

For Portuguese people, therefore, the euro crisis did not start in 2011. This has played an important role in halting any huge shift in the electoral landscape.

The Politics of the Left

Another important aspect which has shaped the differences of Portugal’s electoral landscape to that of Greece and Spain’s has been the politics of the left. In Portugal, the Communist Party dominates left-wing politics and protest through an electoral pact with the PEV Green Party; a pact that it established and controls. The party attempts to monopolize mobilization against the government by using its close ties with the largest trade union confederation, CGTP, to hold onto the 8-10 percent of the vote that it regularly garners.

By maintaining this strength, Portugal’s Communist Party continues to serve as a legitimate electoral party of protest on the left. This is in contrast to Greece’s Communist Party, which failed to make much of a dent in the Greek parliament due to its greater disengagement from electoral politics. The strength of the Communist Party in Portugal, however, meant there was not the same kind of vacuum for a radical anti-austerity party to inhabit, as it did in Greece and Spain. This is something that high-ranking center-right Portuguese government officials told me with surprising regularity when I was conducting fieldwork in Lisbon this summer.

The dominance of the Communist Party in Portugal amongst progressive forces has also played an important factor in diluting the impact of new social movements in challenging the politics of austerity—the kind of movements that Syriza and Podemos were built upon.

The severe contraction of Greece’s economy left large sections of the population facing problems fulfilling basic human necessities. This gave rise to a network of solidarity structures including social solidarity clinics to provide free healthcare for citizens in need. The response to the humanitarian crisis by these volunteers is not considered to be one of charity, however, but a political response seeking progressive change. The development of these groups has been important in helping Syriza increase its share of the vote from 4 percent only a few years ago to become Greece’s largest party.

In Spain, a similar process has occurred. In the face of a huge housing crisis, a community network called the Platform for People Affected by Mortgages (PAH) has supported those affected by the country’s biggest economic concern. As with Greece, this large-scale movement and the politics around it provided a solid foundation for Podemos to grow its support. This is most evident in the recent election of new mayors in Barcelona and Madrid, both of whom have close links to Podemos (the mayor of Barcelona was actually a founder of the PAH movement).

As well as the politics of the left showing deficiencies, the incumbent center-right parties have done well to maintain their popularity. In particular, they have successfully presented themselves as economically responsible by using the “household debt” analogy to explain Portugal’s economic situation.

This intuitive analogy describes the national budget along similar lines to a household’s finances. The story goes that the government has lived beyond its means and that—as would be the case in a household—once the bad times hit there is no alternative but to tighten the belt in order to get the finances back under control. This is not how government finance functions at all—but the power with which it intuitively speaks to people’s everyday understanding of economic functions has been instrumental in allowing the Portuguese government to implement austerity.

The parallels with U.K. politics are incredibly similar. The coalition government, led by the Conservative Party did a similar job of undermining the center-left Labor Party for its economic policies, using the same household debt analogy. And, if the result of the British general election is anything to go by, Portugal will see the center-right Social Democratic Party holding onto power.

Jamie Jordan is an ESRC Ph.D. candidate in international relations at the University of Nottingham, U.K. This article was previously published on TheConversation.com