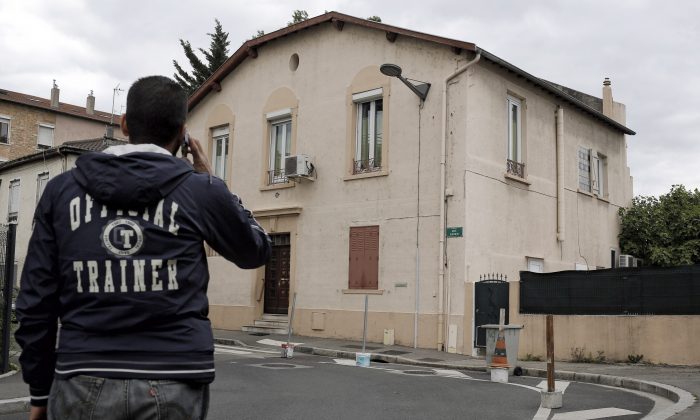 FILE - In this file photo dated Tuesday, May 26, 2015 a man makes a phone call as he walk past a mosque in Oullins outside Lyon, central France. The mosque won an unusual case last week against a Salafi worshipper taken to court after months of tension. The case was thought to be the first in France by Muslims against a Muslim invoking a 1905 law to guarantee secularism _ used by the government to pass bans on headscarves and face-covering veils. (AP Photo/Laurent Cipriani, File)
Europe

Austere Brand of Islam on Rise in Europe, Stirring Concerns

PARIS— Its imams preach austere piety, its tenets demand strict separation of sexes — and some of its most radical adherents are heeding the call of jihad. Salafism, an Islamic movement based on a literal reading of the Quran, is on the rise in France, Germany and Britain, security officials say, with Salafis sharply increasing their influence in mosques and on the streets.

The trend worries European authorities, who see Salafism as one of the inspirational forces for young Europeans heading to Syria or Iraq to do battle for the Islamic State group. Experts, however, point out that the vast majority of Salafis are peace-loving.

In Germany, there are currently about 7,000 Salafis in the country — nearly double the 3,800 estimated four years ago, the Interior Ministry said last month. About 100 French mosques are now controlled by Salafis, a small number compared to the more than 2,000 Muslim houses of worship, but more than double the number four years ago, a senior security official told The Associated Press. He spoke on condition of anonymity because he is not authorized to discuss the matter publicly. France does not do head-counts by religious practices or origins.

In Britain the numbers are on the rise, too. Seven percent of Britain’s 1,740 mosques are run by Salafis, according to Mehmood Naqshbandi, an expert on Britain’s Muslims and counter-extremism adviser to the British government who keeps a database of the various currents of Islam in Britain. He says those numbers are steadily growing, especially among young people — and that a quarter to half of British Muslims under 30 “accept some parts or all of the Salafi theology.”

Today, the Internet is largely seen as the main route for youth to quickly radicalize. But radicalization can be cultivated in places where Muslims socialize, like mosques. And there, said the French security official, it is Salafis who are considered the principle purveyors of radical ideology.

Experts say Salafis in France have been waging a campaign of stealth to take over mosques. First they develop a following, then begin criticizing the imam in order to win control over the faithful, security officials and moderate Muslims say. Youth and converts to Islam are considered the most vulnerable to such messages.

Experts of Islam divide Salafis into three groups: the traditional brand of “quietists” who eschew politics; those who become politicized; and the hardcore worshippers who follow the call of jihad.

Today, Salafism has become a buzzword for danger. In Germany, authorities consider all Salafis as extremists, and security officials in Europe believe there is a direct line from the peaceful version to the version that embraces jihad — and risks tempting the fragile into fanaticism.

“The bridge is short,” said Alain Rodier, a former intelligence officer who is now a terrorism specialist.

Salafism, in principle, should not be a cause for concern, said Naqshbandi, the British expert. But, he said, the very simplicity of its message means anyone can warp it to his own ends.

“People who want to pursue militant political Islam have a set of tools available … which they can twist to argue their case,” Naqshbandi said. He called the Islamic State group, which champions Salafism, the prime example of how the theology can be abused.

Those who practice Salafism — which comes from the word “salafs,” or ancestors — seek to emulate the Islam of the prophet Muhammad and his early followers, which they consider the purest form of the religion. Salafis, who are Sunni Muslims, are easily identifiable. Men wear beards and robes above the ankle and women often cover their faces.

A mosque outside Lyon won an unusual case last week against a Salafi worshipper taken to court after months of tension. Faouzi Saidi, 51, was convicted of troubling public order inside a house of worship and fined. He admitted to criticizing the imam for what he claimed were theological lapses, but claimed he only once held “parallel prayers” in a corner with a group of followers.

The case was thought to be the first in France by Muslims against a Muslim invoking a 1905 law to guarantee secularism — used by the government to pass bans on headscarves and face-covering veils.

France has worked to put a safety ring around Islam since deadly January terror attacks in Paris, seeking to stifle the spread of extremism in areas considered fertile terrain. Authorities have notably started taking down Internet sites that glorify terrorism and are pressing ahead with a training program to instill imams with French values.

Critics say police often infringe upon the freedom of worship in their mission to monitor Salafi extremists. “It would be naive to think there is never a risk,” said Samir Amghar, a specialist on Salafism. But to consider that every sign of ultraconservative Islam presents a danger “risks stigmatizing a large majority of Muslims.”

And some Salafis say that the common image of their lives as being one of rigid worship — with no enjoyment — is a myth.

Olivier Corel, a Salafi who reportedly figured in the religious life of Mohammed Merah — who killed three children, a rabbi and three paratroopers in 2012 — went skiing with his wife in the Pyrenees in January.

Rachid Abou Houdeyfa, a Salafi imam in the western French city of Brest known for his You Tube sermons of do’s and don’ts, created one video showing himself and a buddy in a pleasure boat and titled it “Can One Have Fun?”

“We’re going swimming,” he said before diving into the water.