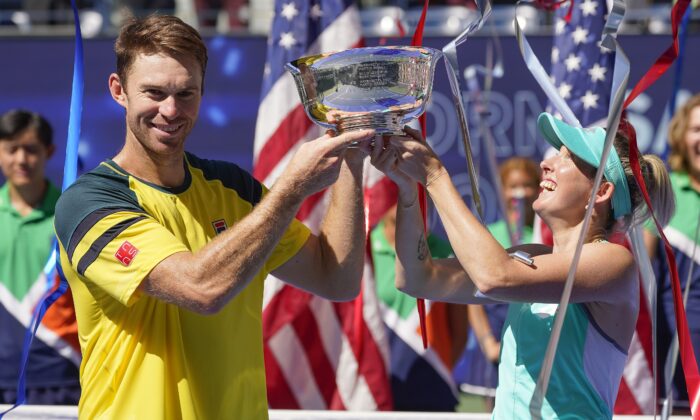 John Peers (L) and Storm Sanders of Australia hold up the championship trophy after winning the mixed doubles final against Kirsten Flipkens of Belgium, and Edouard Roger-Vasselin of France at the U.S. Open tennis championships in New York, on Sept. 10, 2022. (Matt Rourke/AP Photo)
Tennis

NEW YORK—John Peers had fallen short 31 times in Grand Slam mixed doubles tournaments before finding the perfect partner—right in his own country.

Peers and fellow Australian Storm Sanders won the U.S. Open title Saturday by rallying for a 4–6, 6–4, 10–7 victory over the team of Kirsten Flipkens and Edouard Roger-Vasselin.

Peers said he and Sanders already had been set with other partners the previous times they had discussed playing together, then decided to revisit the topic earlier this year.

“We sort of said a few months back, ‘Look, if we don’t do really well with a different partner, let’s try to do the U.S.,” Peers said. “We sort of held off. I said, ’Let’s hang off and see what happens.’”

Seeded fourth, they pulled out narrow victories in the previous two rounds, edging 2021 U.S. Open women’s singles runner-up Leylah Fernandez and past men’s doubles champion Jack Sock in the quarterfinals, then taking a match tiebreaker against Caty McNally and William Blumberg in the semifinals.

Sanders and Peers raced to a 4–1 lead in this match tiebreaker, then recovered after Flipkens and Roger-Vasselin grabbed the lead at 6–5.

“I trusted Johnny on his serves and volleys,” Sanders said, calling the tiebreaker a blur but remembering that she hoped “he can hit a good serve on match point.”

Peers did, firing an ace.

Sanders and Peers became the first Australian team to win the U.S. Open mixed doubles title since Rennae Stubbs and Todd Woodbridge in 2001. They earned $163,000.

Roger-Vasselin was playing in his first major mixed doubles final in his 25th attempt, including second with Flipkens.

Peers teamed with former women’s No. 1 Ash Barty last year in the Olympics, where the Australians won a bronze medal.

And after his lengthy search for a winning partner in a Grand Slam, Peers won’t need to go hunting again for the next one, back home in Australia in 2023.