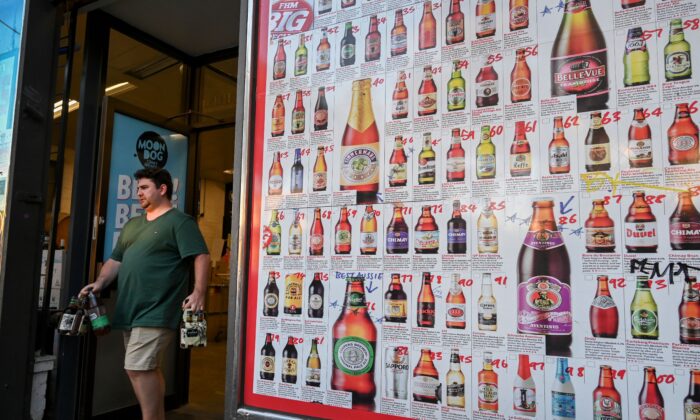 A man leaves a "bottle shop" displaying a sign showing dozens of beers for sale, in Melbourne, Australia on March 31, 2020. (William West/AFP via Getty Images)
Australia

Two in five Australians have been drinking more alcohol during the COVID-19 pandemic, a new study shows.

Two in five Australian survey respondents reported drinking more alcohol since February, while about half of the cannabis-users surveyed said they increased their consumption over the same period.

About half of both samples said they were partaking in their vices alone more often than before the pandemic.

“Drinkers who reported having a diagnosed mental health condition were more likely to report increasing their drinking compared to February, before COVID-19 restrictions,” co-lead researcher Monica Barratt from RMIT University said in a statement.

However, the survey also showed two in five Australians were also drinking less, and MDMA and cocaine use had decreased.

The decrease in illegal party drug consumption was largely attributed to the lack of access to settings like nightclubs, festivals and parties.

“Drug market shifts were reported too, including half of the Australian respondents saying availability of illegal drugs had decreased, one third reporting increases in drug prices, and one in five reporting decreased drug purity,” Barratt said.

Over 55,000 people were surveyed across the globe, with the Australian trends fitting with larger international trends.

Forty-three percent of all respondents reported higher alcohol consumption during the pandemic, with 39 percent of cannabis-users also partaking more often.

The biggest increases in cannabis usage were recorded in Australia at 49 percent, and the US at 46 percent.