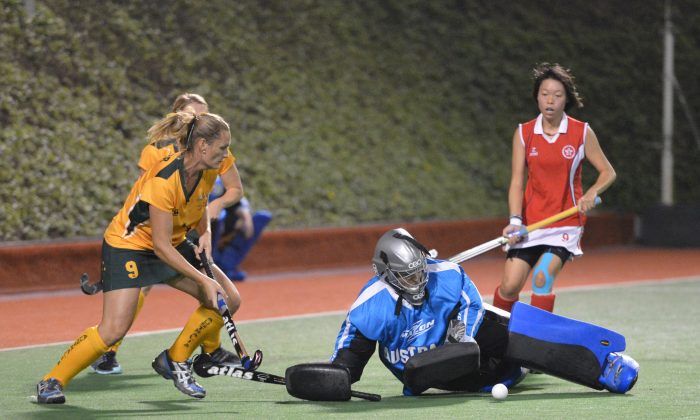 Following their games against KCC, Khalsa and HKFC, on April 8 and 9, respectively, the Australian Country Men and Women Teams met the Hong Kong National teams on the evenings of Thursday and Friday April 11 and 12, respectively.

Discussing with The Epoch Times before the Thursday matches, the Australian Tour Manager, Michael Nelson explained some of the background to the tour.

“The Hockey Australia Country Teams Men and Women are selected from our National championships, which are held in August each year. In 2012, those championships were in Bendigo, in Victoria and we actually selected four teams.

The Australian Country Men and Women Teams tour internationally each year and have represented Australia in several international tournaments all funded from the player’s own pockets.

“It is all self-funded, but we manage to come away for two weeks each year,” Nelson said.

“We select U21 Men and Women and they go to the Oceania Pacific Cup in Fiji and represent Australia in FIH Cups.

“Last year we actually came home with gold for the men and silver for the women. And these senior teams tour in April each year.

“Last year it was Bangkok and Malaysia, and before that New Zealand.

“This year it has been Singapore and Hong Kong. We spent a week in Singapore before coming here. Unfortunately we were not able to play their national teams as they had Youth Olympic qualifying on, but we played the top four club Premier Division sides.

The men’s and women’s teams had not dropped a game at this point in the current tour and Nelson was hoping for a clean sweep.

“We have had a good tour, we have won all games so far and, hopefully, we will win again tonight,” he said.

“We flew in [to Hong Kong] from Singapore on Monday and the women played Kowloon Cricket Club and had a narrow win (3-2). And the men played Khalsa Association, and we had a good win, although man-for-man we think we were just a bit fortunate. We played quite strongly and that tipped them over a bit.

On Thursday April 11 the Hong Kong Women’s team was not at full strength, but selected from local ethnic Chinese players. The Aussie women dominated the game and came away winners 3-0.

Meanwhile, the Hong Kong men were at fairly full strength and had a good match against the visitors. The game was very competitive with the Hong Kong side winning 5-3.

Before the second set of ‘International’ matches on the Friday evening (April 12) the Aussie Tour Manager summed up the situation.

“We did have a bit of a chat. The boys were fairly disappointed. They thought they had done enough to get over the line—they did have more goal shots, but the goals were just not going in, it was not their night last night. That is not to take anything away from the HK National team, they were fantastic,” said Nelson.

When asked their plan for the Friday matches, Nelson responded.

“Just to go out and play good hard fast hockey. Not to be over-awed.

“I felt they had become a little too cautionary in defence last night. They were afraid of giving away corners and tended to be on the back foot rather than being attacking with their defence. And I think the locals made good use of that.

“A few of them were caught ball watching too with the razzle, dazzle of some of their skills and they were just afraid to really commit at different times.

“Our boys from the bush, they were devastated by losing because they never like to lose, but they are realistic. There was a 15-minute session in the middle when I think they panicked a bit and the locals scored three goals in that 15 minutes. They re-grouped and came back at it and they will never ever give up and will play it out to the last second and that is important.”

But the Hong Kong men’s and women’s representative teams were of a different make up in their second meetings.

The Australian women’s team may have been a little tired after four matches in five days and they did not quite have the same snap as on previous nights, but the changes to the Hong Kong side seemed to make a lot of difference.

Bell-Kake directed operations for Hong Kong as well as making some excellent tackles, runs with the ball and good distribution and the Hong Kong team finished the match victorious at 1-0.

It was excellent experience for the Hong Kong women’s squad and one they are sure to remember and appreciate in the coming years.

Meanwhile, Mark Kake, coach of the Hong Kong men’s team, also made some changes—asking just the local Chinese players to play together in the first half as several of the more experienced players sat on the sideline.

Ishtiaq Ahmed, one of Hong Kong’s star players who played a big part in the win the previous evening, was not available as he had twisted an ankle towards the end of Thursday night’s game.

The Aussies, perhaps wanting to avenge the defeat of the night before, were much more determined and purposeful, and dominated play in the first half racking up a 5-0 score-line.

Hong Kong re-introduced their sidelined players early in the second half and the match became a much better contest—in fact, Hong Kong players considered they “won” the second half 3-0 and they were very pleased with that performance. But the aggregate match score was 5-3 to the Australian County team.

These matches have been excellent for the Hong Kong Hockey and more international squads should be encouraged to visit Hong Kong using a similar format. The “warm-up” games against the top Hong Kong clubs enabled team members to get acclimatised to local conditions and organise themselves for the national level matches.

As Michael Nelson commented: “In some ways the scores are irrelevant; if us being here contributes to Hong Kong Hockey in some way that is terrific.”