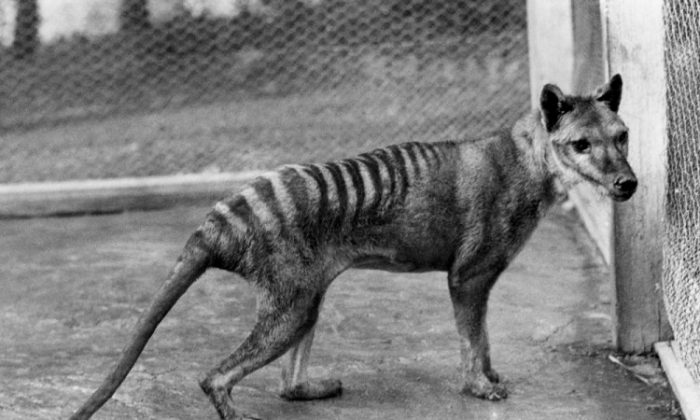 Marina Zhang
Marina Zhang is based in Melbourne and focuses on Australian news. Contact her at marina.zhang@epochtimes.com.au.
View profile
Follow
and Victoria Kelly-Clark

An Australian university is moving to turn science fiction into reality and forwarding marsupial conservation efforts by bringing back to life the extinct Australian apex predator, the Tasmanian tiger.

The tiger, also known as the thylacine or Tasmanian wolf, was once found widespread across Australia, but by the arrival of European settlement in the 18th century, was limited to mainly to the island of Tasmania where, over the next hundred years, it was hunted to extinction by colonialists. The last known creature died in captivity in 1936.

The research will be made possible by a $5 million (US$3.6 million) donation from the Wilson Family Trust to the University of Melbourne and will enable the institution to set up the Thylacine Integrated Genetic Restoration Research (TIGRR) Lab to “de-extinct” the rare marsupial carnivore.

“Thanks to this generous funding, we’re at a turning point where we can develop the technologies to potentially bring back a species from extinction and help safeguard other marsupials on the brink of disappearing,” Prof. Andrew Pask, from the School of BioSciences at the University of Melbourne said.

The funding will provide ten years of research for the TIGRR Lab and allow it to explore one of Pask’s team’s biggest breakthroughs, the sequencing of the thylacine genome, which provides the team with a “complete blueprint on how to essentially build a thylacine.”

Pask said that the funding would enable the lab to “move forward and focus on three areas,” this includes improving their understanding of the thylacine genome, developing techniques to turn marsupial stem cells into an embryo and successfully implanting it into a uterus.

While there are concerns of “de-extinction” while changing habitats and climates, Pask said the thylacine had the most compelling case for de-extinction.

“Of all the species proposed for de-extinction, the thylacine has arguably the most compelling case. This is because the Tasmanian habitat has remained largely unchanged, providing the perfect environment to re-introduce the thylacine, and it is very likely its reintroduction would be beneficial for the whole ecosystem,” he said.

One such hypothesized benefit is the potential benefit of helping control the spread of the viral Tasmanian devil facial tumour disease as the sick devils are no longer preyed upon by an apex predator allowing the infection to spread throughout the population.

The university noted that there the research will also have immediate conservation benefits by advancing Australian researchers’ understanding of marsupials.

“Our work will lead to much-needed technological advances in this space, which include developing methods for creating marsupial stem cells to biobank species diversity and protect against species loss from events like Australia’s recent devastating bushfires.”

“We can develop the technologies to potentially bring back a species from extinction and help safeguard other marsupials on the brink of disappearing,” said Pask on Mar. 1.

However, other research discussing de-extinction and conservation genetics have argued that genetic techniques are merely “conservational biology” and limited in their conservational function.

A report by the American Museum of Natural History in 2017 has mentioned that some conservational researchers have argued that “short-term demographic patterns of endangered and threatened species and the population is much more important.”

Though genomics, gene editing and animal cloning technologies of de-extinction are integral parts of conservation genetics, “it’s an immediate contribution to solving the biodiversity crisis is limited,” the authors argued.

Pask said their research would undertake “nine key steps to the de-extinction” of the animal, of which the first and second step—mapping the thylacine’s genome and finding a closely related marsupial—have been done.

The lab is currently at the third and fourth steps, which entail finding all the genes in the stem cell of the chosen marsupial that will be added and removed to create the “thylacine cell.” Diversity will also be bio-banked and added into the cells, possibly by introducing variation.

Steps 5 to 7 will involve technologies to change the stem cell into an embryo, which will be successfully implanted into a host cell’s uterus. The team is currently nominating dunnarts and Tasmanian devils as possible hosts.

Steps 8 and 9 will involve the birth and care of the cloned Tasmanian Tiger.