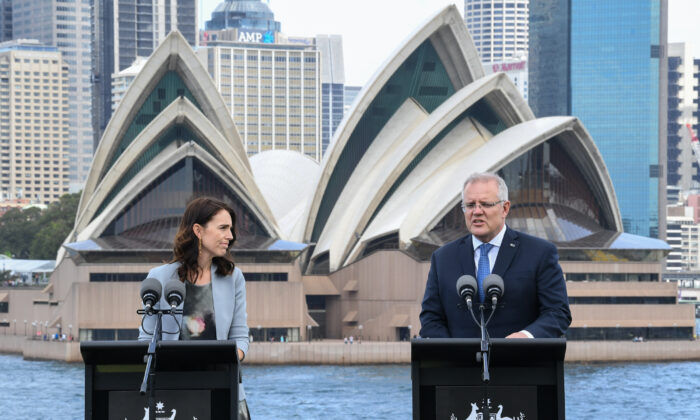 The woman is allegedly an Islamic State operative.

In a media statement on Feb. 16, Ardern said that the case had been known to authorities in Australia and New Zealand for some time, and that she believed given the woman had lived in Australia from the time she was six, it was wrong for Australia to let New Zealand “shoulder the responsibility” for the situation.

“We believe Australia has abdicated its responsibilities in relation to this person and I have personally made that point to Prime Minister Morrison,” Ardern said.

“Our international obligations are important to New Zealand,” she said. “Where dual citizenship is involved, our view has been that it’s for New Zealand and Australia to resolve the most appropriate response and ensure that we do not strip citizenship and render someone stateless, especially when children are involved.”

But Australian Prime Minister Scott Morrison has said that due to a clause in Australia’s citizenship laws, the woman has renounced her right to citizenship.

“The legislation that was passed through our Parliament automatically cancels the citizenship of a dual citizen where they’ve been engaged in terrorist activities of this nature,” Morrison said. “And that happens automatically. And that has been a known part of Australia’s law for some time.”

Under the 2015 Citizenship Amendment, a person aged 14 or older who holds dual nationality renounces their Australian citizenship if the person engages in international terrorist activities.

“Australia’s interest here is that we do not want to see terrorists who fought with terrorism organisations enjoying privileges of citizenship, which I think they forfeit the second they engage as an enemy of our country. And I think Australians would agree with that,” Morrison said.

However, the situation is made complicated by the woman’s young children who are not covered by Australian citizenship laws due to their parents’ activities.

In 2019, the Australian Human Rights Commission in a submission on the 2015 Amendment, recommended that children be exempt from the loss of citizenship despite their parents actions.

Likewise, in 2012, the United Nations (pdf) also called for Australia to ensure no child is deprived of citizenship on any ground regardless of their parents’ status.

New Zealand law professor Claire Breen said this is important. Breen noted in an article published by The Conversation that Australia and New Zealand are both signatories to the 1989 UN Convention on the Rights of the Child, and as such, these rights must inform any decisions made about the future of these two children.

“For the children involved, a number of the convention’s guiding principles underpin these rights,” Breen said.

In particular, she noted that countries who have signed onto the convention are required to ensure the child is protected against all forms of discrimination or punishment based on the status or activities of the child’s parents.”

“These are rights, not privileges,” Breen said.

“The welfare of the children also needs to be at the forefront in this situation,” Ardern said.

“These children were born in a conflict zone through no fault of their own. Coming to New Zealand, where they have no immediate family, would not be in their best interests. We know that young children thrive best when surrounded by people who love them,” she said.

More than 60 Australian women and children are currently in detention camps in Syria’s north-east since the collapse of the Islamic State in Syria in 2019.