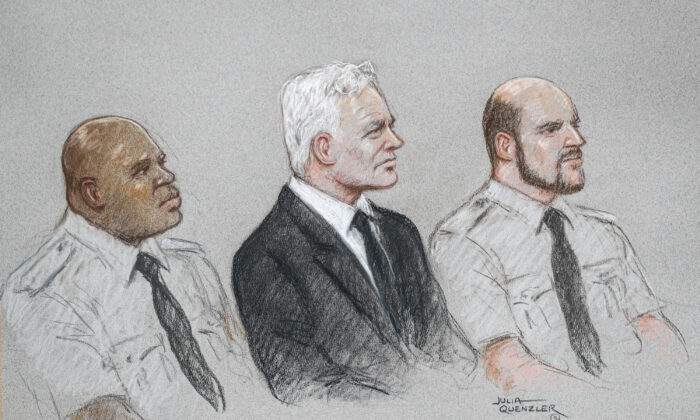 A courtroom sketch shows WikiLeaks founder Julian Assange during a hearing to decide whether he should be extradited to the United States, in London, Britain, on Sept. 7, 2020. (Julia Quenzler/Reuters)
Australia

Aussie PM Has ‘No Issue’ With Assange Coming Home

Australia has no issue with Julian Assange returning to his home country if his massive extradition battle with the United States government is resolved in his favour.

A UK judge has ruled the WikiLeaks founder should not be extradited to the United States to face espionage charges due to concerns about his mental health and U.S. jail conditions.

Judge Vanessa Baraitser delivered her verdict at London’s Old Bailey court, saying she was alarmed by the effect incarceration in Britain’s Belmarsh prison has had on the 49-year-old Australian activist’s mental health.

“I have decided extradition would be oppressive by reason of mental harm and I order his discharge,” she told the court.

But the U.S. government has signalled it intends to appeal the ruling within the next 14 days.

Prime Minister Scott Morrison said while Australia was not a party to the case, Assange was being offered continuous consular support as he continues to fight his case.

“Assuming that all that turns out, then he’s like any other Australian—he’d be free to return home if he wished,” Morrison told Melbourne radio 3AW on Jan. 5.

However, Assange’s Australian lawyer Jennifer Robinson warned this would not necessarily protect him from further U.S. extradition attempts.

The Bring Julian Assange Home Parliamentary Group said the government should ensure when Assange is returned there was no avenue for an extradition to the U.S.

Labor frontbencher Mark Dreyfus said the Morrison government should “draw a line” under the matter and encourage the U.S. government to bring its action to a close.

Chelsea Manning, the U.S. soldier who was convicted of leaking information to Julian Assange, had her sentence commuted by the U.S. President in 2017.

“Given his ill health, it is now time for this long drawn-out case against Julian Assange to be brought to an end,” Dreyfus said.

The U.S. Department of Justice noted its UK legal team had won all of its arguments against Assange relating to freedom of speech.

The MEAA, Australia’s journalists union of which Assange is a member, said journalists everywhere should be concerned.

“Julian has suffered a 10-year ordeal for trying to bring information of public interest to the light of day,” the MEAA’s Marcus Strom said.

“But we are dismayed that the judge showed no concern for press freedom in any of her comments, and effectively accepted the U.S. arguments that journalists can be prosecuted for exposing war crimes and other government secrets, and for protecting their sources.”

U.S. authorities have charged Assange with violating the Espionage Act by conspiring with Manning to leak a trove of classified material in 2010 relating to the wars in Iraq and Afghanistan.

The secret documents were released on WikiLeaks while Assange also collaborated with journalists at prominent news outlets.

If the extradition bid is successful, Assange faces 17 counts of espionage and one count of hacking, with a possible penalty of up to 175 years in prison.