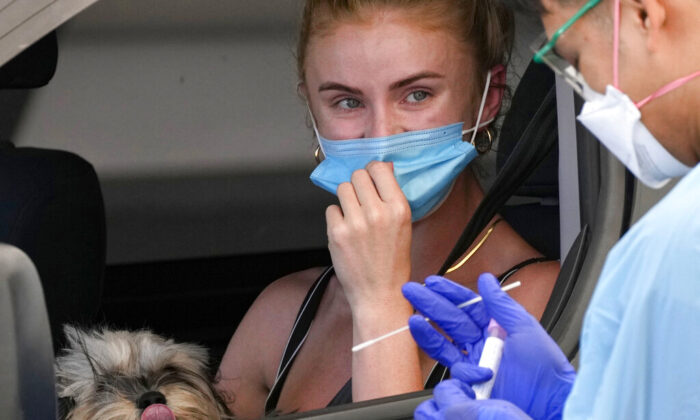 A dog keeps an eye on the presses as a woman has a swab taken at a drive-through COVID-19 testing clinic at Bondi Beach in Sydney, Tuesday, Dec. 21, 2021. (AP Photo/Rick Rycroft)
Australia

A number of COVID-19 testing laboratories forced to close on Jan. 3 due to overwhelming demand in New South Wales will be gradually reopened as the facilities come to grips with the increased demand for testing as the Omicron outbreak continues to grow.

This comes after officials changed the definition of “close contacts” of confirmed cases and Prime Minister Scott Morrison on Dec. 30 outlined the government’s new program and urged the public not to stand in lines to get PCR tests if they didn’t need to.

However, there are increasing calls for federal and state governments to make RATs available free on a large scale.

Speaking on the Today Show on Monday, Morrison said free RATs were already available at testing hubs for those that need them.

“We’re now in a stage of the pandemic where you can’t just make everything free,” he said.

“When someone tells you they want to make something free, someone’s always going to pay for it, and it’s going to be you.”

Officials will meet this week to discuss discounted RAT prices for concession cardholders.

The opposition has criticised the government’s approach to testing, saying undiagnosed people would be spreading the virus within the community as they could not get timely PCR results and could not find a rapid testing kit.

Opposition Leader Anthony Albanese criticised the federal government for failing to prepare for the demand for off-the-shelf tests and PCR tests.

“He [the Prime Minister] was wrong to not prepare to have rapid antigen tests fully available. And they shouldn’t be priced out of people being able to get them either. People who can’t afford them should be given them. That’s the truth of the matter,” Albanese said on the Today Show.

Albanese said the consequences would be “dire” if rapid tests were not freely available.

Meanwhile, Chemist Warehouse director Mario Tascone has called for the GST on the RAT kits to be taken off.

The pharmacy giant currently sells the RATs for $50 per pack of five. Once the GST is taken off, the prices will drop down for consumers to $45 dollars.

“Five dollar saving over a five-pack is significant for most families,” Tascone told Sunrise on Tuesday.

Tascone said the only limitation is how fast and how many can be flown into Sydney and released by customs.

Supply is expected for Sydney pharmacies on Tuesday afternoon whilst stocks for Victoria, Queensland, Tasmania, and South Australia are expected on Wednesday.

Recent public holidays and staff shortages have contributed to delays in stocking the rapid antigen tests but this is expected to be resolved in the coming days with RATs delivered to pharmacies across the state later this week and early next week.

Tascone said that it takes about three weeks for the products to arrive in Australia from the time they’re ordered.

“When everyone realises everything is going out of control, everyone’s got their orders in but they’re all being manufactured right now. By the time they get to Australia, there is a bit of delay.”