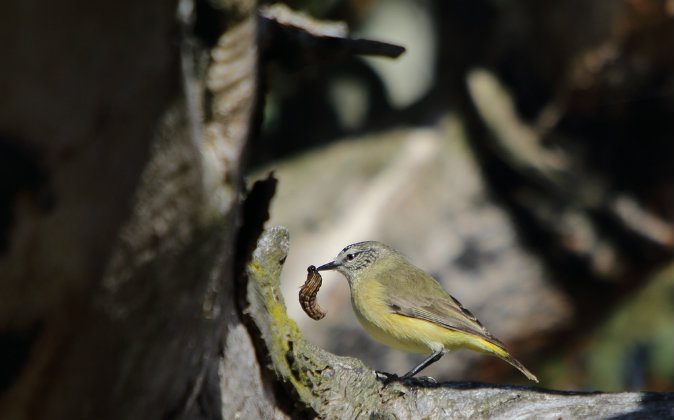 A yellow rumped thornbill, eating a grubs in the Australian Outback. (Shutterstock*)
Australia

Aussie Outback ‘Full of Life’ After Back to Back Rainy Seasons

New South Wales National Parks and Wildlife have said major bird breeding events are being observed across the Macquarie Marshes, between Dubbo and Bourke, and the Gwydir wetlands, near Moree after two seasons of widespread rainfall in Australia.

Ecologist David Smith has said that at present the outback is full of incredible sights.

“There’s a bit of a misconception about the arid zone, that it’s a lifeless place. But it’s incredibly biodiverse, and the critters that live out there are absolutely amazing.

“They’re not just surviving there; they thrive.

“I encourage people to get out to the area. It’s full of life.”

The birds used to fly in flocks of more than 100,000 a century ago, but their numbers are far fewer today.

Smith, a researcher with the Australian National University’s Sustainable Farms, said he’d only ever seen the birds twice in groups of about five.

“All of a sudden, a flock took off, and at first I thought they were crows,” Smith told AAP.

“It dawned on me that it was flock bronzewings, and I was very excited to see that.

A storm had just passed over Tibooburra, providing a dramatic backdrop to their sandy-coloured wings.

Along with their endangered status in NSW, the birds are rarely seen because they frequent arid areas, like the national park near the borders of NSW, Queensland and South Australia.

“They’re arid zone nomads. There’s something cool about birds that move around the arid zone looking for where food and water is and where the conditions are right.

“That they’re hard to find makes it really exciting. You never know whether they’re going to be around or not.”

The greatest threats to the flock bronzewing pigeon are foxes and feral cats, along with grazing, which damages their grassland habitats.