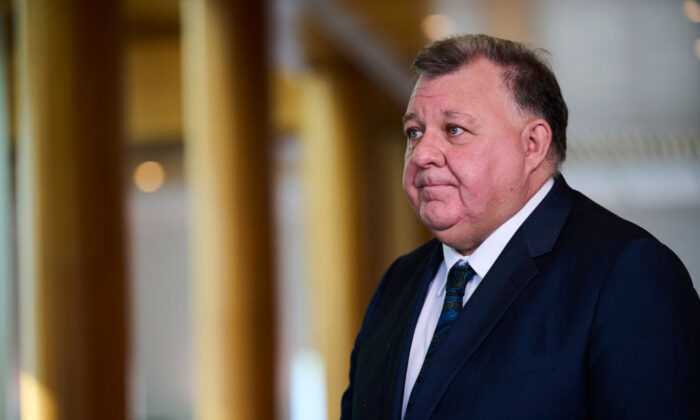 Craig Kelly announces his leadership of the United Australia Party and speaks against COVID-19 vaccination in a press conference at Parliament House on August 23, 2021 in Canberra, Australia. (Rohan Thomson/Getty Images)
Australia

United Australia Party party leader and MP for Hughes, Craig Kelly, is proposing a bill that will cut politicians salaries during lockdowns.

The private member’s bill called We’re All in This Together Act 2021 seeks to reduce politicians salaries to $750 per week while the state or territory is in lockdown.

“ALL MPs need to take a PAY CUT to show their support,” Kelly wrote in a post on Twitter on Sept. 1. “As leader of the United Australia Party, I’ll make sure we’re all truly in it together.”

Kelly told the St George & Sutherland Shire Leader newspaper that if those who make decisions need to go through the same financial distress, the public does, “perhaps they will think harder before making decisions that negatively impact on constituents.”

“If governments are going to continue to deny Australians the freedom to earn a living or prevent them from opening their business, and politicians expect families to survive on $750 per week for an extended period, then politicians and senior bureaucrats, including myself, need to set an example and cut their salaries to the same $750,” he said.

Kelly is currently looking for a seconder among the Parliament’s MPs, who can help to introduce the bill this season. The bill will call on support from all shire and state Liberals and ALP members. If it passes, the legislation will be introduced at a state level as Kelly’s Federal Private Member bill, which is dedicated to truck drivers and asks for “No Requirement for Medical Treatment (Including Vaccination) Without Consent.”

Similarly, Tony Abbott, the former Australian Prime Minister, has raised the issue of temporarily reducing the salaries of MPs and public servants.

“One of the most grating phrases of this whole pandemic has been ‘we’re all in this together because frankly, we haven’t been in it together,” Abbott said in an interview with the Institute of Public Affairs.

“We have got a private sector calamity happening and … no public servant has lost his or her job, no public servant has had his or her pay cut. In fact, in some states, their pay has dramatically increased,” he said, referring to Victoria, in which politicians’ pay has gone up while private sectors are losing jobs and people who still have jobs are experiencing pay cuts.

“The sensible thing to do would be to follow Jacinda Ardern and temporarily reduce the salaries of MPs, and public servants earning, say, over $150,000 a year,” Abbott said.