Aussie MP Asks Whether Australian ABC Is ‘Infiltrated by the Chinese Communist Party?’ 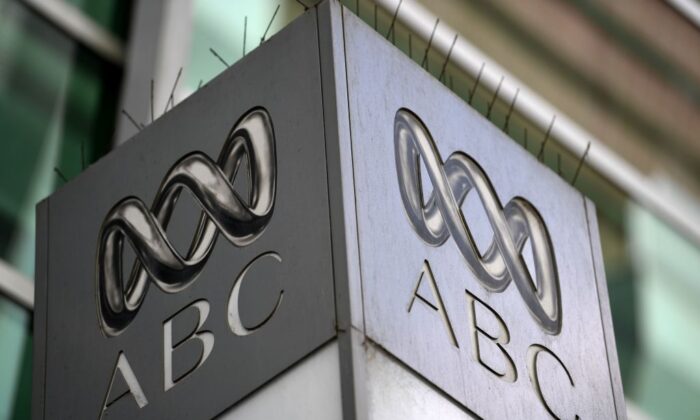 The logo for Australia's public broadcaster ABC is seen at its head office building in Sydney on September 27, 2018. (Saeed Khan/Getty Images)
By Caden Pearson

A member of Parliament has raised concerns about Beijing’s influence at the Australian Broadcasting Corporation (ABC) after it aired a video and radio program evocative of the commonly-used Chinese Communist Party (CCP) propaganda talking points used to persecute Falun Gong for the last two decades.

In response to the video program aired on July 21, Liberal MP Craig Kelly took to Facebook to ask the question: “Have the ABC been infiltrated by the Chinese Communist Party?”

“How else [do] you explain the ABC’s hit job on the peaceful Falun Gong?” he continued.

The ABC’s attacks fell on the 21st anniversary of the CCP’s persecution of the practice, which began on July 20, 1999.

Kelly posted a photo from a Falun Gong rally he had spoken at, where he had stood in front of a wall of banners that read “Falun Gong: Meditation Guided by Truth Compassion Forbearance,” and “Independent Tribunal Found China Guilty of Forced Organ Harvesting.”

One of the banners in the photo has been digitally edited to read: “Help Stop Persecution of Falun Gong in China;” to which he added the words: “and by ‘their’ ABC in Australia.”

Kelly also called out the CCP for its espionage activities, including monitoring comments even outside of China, writing: “with this picture I’ll be marked in some little black book of the Chinese Communist Party (and probably at the ABC as well).”

“It is easy to denigrate any organisation by giving air-play to only disaffected ex-members,” he added, and alleged that the program “never fact-checked any of their accusations.”

“And of course, no mention was made of the horror of the organ harvesting where thousands of Falun Gong prisoners for years have been killed on demand, like lobsters in a tank in a restaurant, so their organs can be cut out and sold for transplant. But then, we wouldn’t want to endanger the ABC’s cozy arrangement with the Chinese Communist Government, would we?”

Christensen called the video program a “hit piece” and writes: “Talk about crossing the line!”

“The attack on the group by ‘our’ national broadcaster is bizarrely timed as they commemorate 21 years of oppression and victimisation at the hands of the CCP. Priorities?” he wrote.

On July 23, Liberal Democrats MPs Tim Quilty and David Limbrick published a media release in which they called on the ABC Board to investigate whether the video and audio programs about Falun Gong breached the ABC’s own policies by “inciting undeserved stigmatisation of a vulnerable religious minority.”

Limbrick wrote: “There are many adherents of Falun Gong in my electorate, and I am horrified that they have been misrepresented and vilified by our state broadcaster. This is the kind of thing they came to Australia to avoid.”

He described the ABC program as “trivial and naive.”

He writes of the producers: “They seemed to be completely unaware that the information they gathered could be used by the Chinese Communist Party as justification to continue their persecution.”

The CCP’s agency specifically set up to persecute Falun Gong, the 610 office—named for the date of its creation on June 10, 1999—immediately leveraged ABC’s program to justify its persecution of Falun Gong.

On July 17, a website set up under the umbrella of the 610 office with the express purpose of defaming Falun Gong, lauded ABC’s program and claimed the CCP has been “warning the world” about the spiritual practice.

Limbrick noted that the Falun Gong representatives had addressed a number of misrepresentations, including claims that practitioners could not seek medical treatment.

In a press release, a spokesperson from the Falun Dafa Association of Australia wrote: “The content of the ABC documentary … closely tracks with the discredited propaganda narrative of the Chinese Communist Party. The press release [published by the ABC] implies that Falun Gong may not be deserving of the sympathy their plight has garnered in the west.”

The member for Northern Victoria, Quilty, writes: “The ABC journalists have not only ignored a letter from Falun Gong before the story went to air that pointed out a number of basic inaccuracies, they refused to meet with members of the Australian Falun Gong to discuss it.”

Quilty wants an investigation to determine whether or not the CCP provided the ABC material for the program.

In a statement to The Epoch Times, an ABC spokesperson said the public broadcaster “stand[s] by the accuracy and integrity of the reports.”

“The ABC completely rejects any claims its reporting on Falun Gong was sourced from or influenced by the Chinese Communist Party,” the spokesperson said via email on July 24.

The ABC spokesperson pointed to interviews with Jonathon Lee in New York, and John Deller and Dr. Lucy Zhao from the Falun Dafa Association of Australia, as examples of their efforts to provide a right of reply to Falun Gong.

However, the ABC did not interview Zhao until July 17—four days before the program was scheduled to air.

“They didn’t contact us at all for any interview before we contacted them,” Zhao told The Epoch Times on July 24.

Zhao was at Town Hall in Sydney, attending a commemorative rally to mark the anniversary of the start of Falun Gong’s persecution when the ABC interviewed her. This interview was included in the program.

Asked whether the ABC gave her fair treatment, Zhao said: “Not really. They didn’t tell me what the program is about or what question they wanted to ask or how my interview would be used. I said a lot of things about how Falun Dafa benefits millions of people, including myself …”

Zhao offered to introduce the ABC to Falun Gong practitioners they could interview: “… So they can have a more balanced and fair report. But they were not interested and didn’t interview any other practitioners,” she said.

“They just wanted to get some words they wanted from me and were not interested in listening or reporting truthfully what I want to express,” she added.

Falun Gong, also known as Falun Dafa, is a spiritual practice that involves meditative exercises and moral teachings based on truthfulness, compassion, and tolerance.

Since July 1999, the CCP regime has severely persecuted Falun Gong, with hundreds of thousands of adherents detained in prisons, labour camps, and brainwashing centers, often while also being tortured. Thousands have died, according to the Falun Dafa Information Center, though the true number of deaths is likely far higher due to the difficulty of obtaining such information from China.

The ABC has participated in a China-Australia journalism exchange program connected to the CCP’s United Front systems, up until the COVID-19 pandemic disrupted the 2020 trip planned for February.

The CCP’s United Front is tasked with carrying out influence operations overseas, including in Australia, and has been a key apparatus in the CCP’s propaganda warfare campaign since the time of Mao Zedong (pdf).

In a submission to the Parliamentary Joint Committee on Intelligence and Security on Jan. 22, 2018 (pdf), Clive Hamilton and Alex Joske, wrote that Australia’s mainstream English-language media were targets of the CCP’s Propaganda Department.

Funded by Huang Xiangmo, ACRI is committed to providing “a positive and optimistic view of Australia-China relations.”

These “carefully orchestrated” exchange programs have been operating as a joint initiative between the Asia Pacific Journalism Centre (APJC) and the United Front-linked All-China Journalism Association.

Since 2013, journalists from a number of Australia media organisations have participated in the United Front-linked exchanges—including the ABC, The Australian Financial Review, The Australian, and more.

This article has been updated with responses from the ABC and Dr. Lucy Zhao.