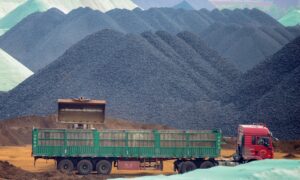 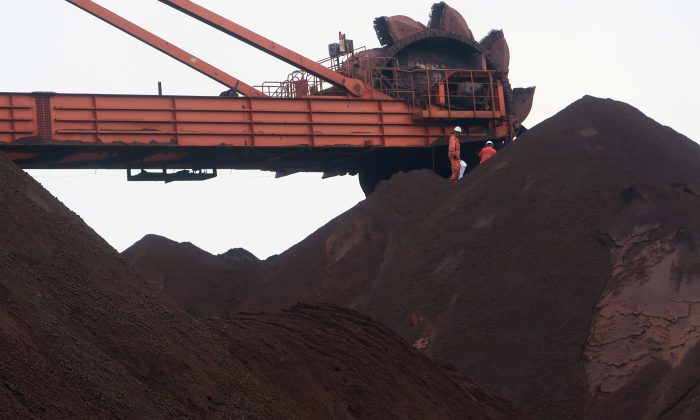 Workers are seen on the top of an iron ore pile as a machine works on blending the iron ore, at Dalian Port, Liaoning Province, China on Sept. 21, 2018. (Muyu Xu/Reuters)
Australia

According to RBC analyst Kaan Peker, Chinese steelmakers have been reducing production for the last five weeks, partly due to the Chinese Communist Party’s (CCP) ban on Australian coal imports into the country, and the upcoming Chinese New Year period.

Residents were told not to turn on heating until the temperatures dropped below 3 degrees Celsius, or 37.4 degrees Fahrenheit.

It was revealed in November that over $700 million worth of Australian coal was being held up at Chinese ports, amid a continuing Beijing-instigated trade dispute between the countries. Currently, the dispute has encompassed beef, wine, barley, lobster, timber, and cotton.

But despite the heavy intervention by the CCP, Fortescue Metals CEO Elizabeth Gaines says the miner has seen no slowdown in demand for the mineral, AAP noted.

“We’re actually very pleased with the performance for the quarter, and certainly the record for the half,” Gaines said.

The company shipped 46.4 million tonnes of iron ore in the December quarter, the same amount in 2019.

In fact, China paid 9 percent more per tonne for iron ore in December than in November. Iron ore exports also increased by 15 percent.

Australia also recorded its fourth-highest trade surplus ever at $9 billion, up from $7.4 billion in the previous month.

The CCP’s 14th Five-Year Plan released last year saw a greater focus on reducing emissions by increasing scrap metal use and a push for steelmakers to update mills, which could force several facilities to close.