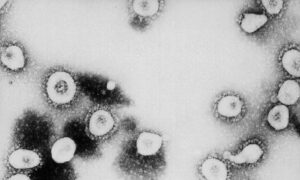 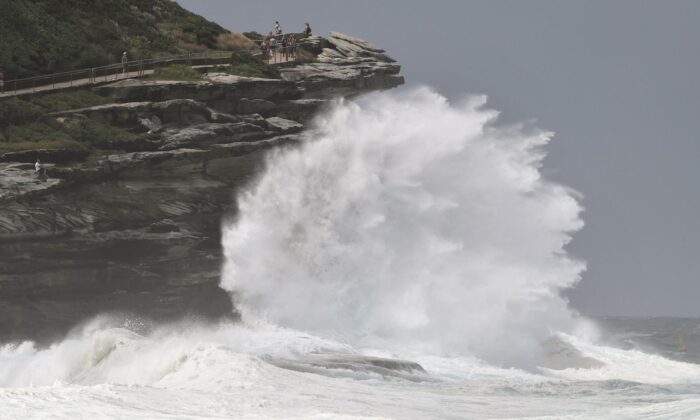 People watch the spray as large seas pound the coast near Tamarama Beach in Sydney on March 6, 2017. (William West/AFP via Getty Images)
Australia

Investigations are continuing into the deaths of two rock fishermen who died in the New South Wales (NSW) Illawarra, with police and lifesavers praised for saving a third man.

The fishermen were swept off of rocks near Port Kembla south of Sydney.

Police said the alarm was raised by members of the public when three men from Lakemba and Wiley Park in western Sydney were washed into the sea on Friday evening near Hill 60 Lookout.

Two of the fishermen, aged 38 and 31, died. A 42-year-old man is being treated in Wollongong Hospital for water inhalation and hypothermia.

“The actions of our officers, our surf lifesaving partners, our ambulance officers and the toll helicopter … certainly saved one person’s life,” NSW Police Superintendent Dean Smith told reporters on Saturday.

One of the police officers swam about 100 metres to retrieve a fisherman and police said all three fishermen were supported in the water.

Smith paid tribute to the traffic and highway patrol officer who swam 100 metres to one of the fishermen, saying he was proud of the officer.

“It’s something that doesn’t happen every day,” he said.

Smith said that two other police officers suffered minor injuries when they were hit by a wave while spotting for the rescue helicopter.

Police and surf lifesavers on Saturday again issued warnings about the dangers of rock fishing.

Surf Lifesaving NSW CEO Steven Pearce said there was a dangerous swell on Friday night and it’s believed none of the men were wearing life jackets or personal devices.

Pearce said that the actions of lifesavers and police was “outstanding.”

“No words can describe the chaotic scene that paramedic crews and other first responders were faced with,” he said in a statement. “It was absolutely heartbreaking to respond to a scene where previous lives have been lost despite the warnings.”