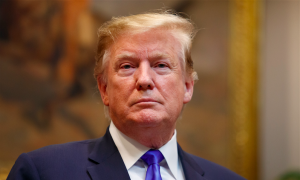 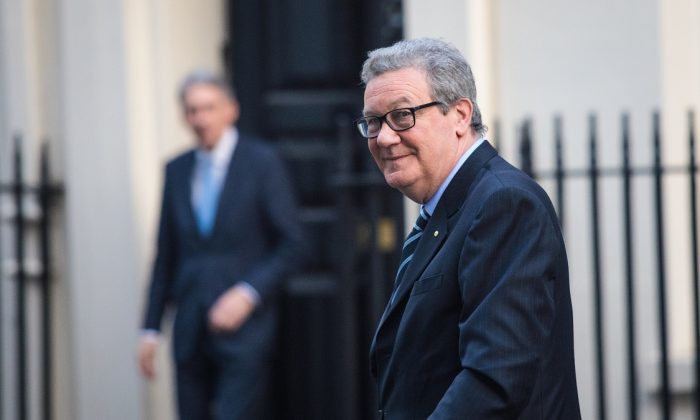 Former Australian High Commissioner to the UK Alexander Downer is famous for telling the FBI about something he heard in 2016 in a London pub from a young campaign aide to then-Republican presidential candidate Donald Trump.

Less well-known is Downer’s connection to Chinese intelligence and to the Clinton Foundation.

Smartphone maker Huawei appointed Downer to its board of directors in 2011. He defended the firm, despite years of U.S. intelligence warnings that it’s a tool of Chinese intelligence.

Worries about Huawei’s role in Chinese spying in the United States are so great that President Donald Trump will sign an executive order this week banning the use of the firm’s telecommunications equipment by U.S. companies.

Trump’s order results from a February 2018 Senate Intelligence Committee hearing in which the leaders of the top six U.S. agencies with counterintelligence duties warned that Huawei is a tool of Chinese spymasters.

“We’re deeply concerned about the risks of allowing any company or entity that is beholden to foreign governments that don’t share our values to gain positions of power inside our telecommunications networks,” FBI Director Chris Wray told the committee.

Concerns about Huawei aren’t new, as seen in a 2012 report from the House Permanent Select Committee on Intelligence, which strongly encouraged U.S. firms not to use Huawei equipment or that of another Chinese company, ZTE, because “Huawei and ZTE cannot be trusted to be free of foreign state influence and thus pose a security threat to the United States and to our systems.”

The report, which represented a devastating blow to Huawei’s prospects for gaining U.S. market share, noted that “opportunities to tamper with telecommunications components and systems are present throughout product development, and vertically integrated industry giants like Huawei and ZTE provide a wealth of opportunities for Chinese intelligence agencies to insert malicious hardware or software implants into critical telecommunications components and systems.”

The report further detailed more than a dozen critical ways in which Huawei representatives failed to cooperate with the committee’s investigation.

Such concerns didn’t, however, prevent Downer from being a prominent defender of Huawei in the period prior to and following the Australian government’s decision to bar the use of the Chinese firm’s telecom equipment.

The Australian said then that Downer “seems full of zeal to defend Huawei.”

Downer opposed “transmitting a message that somehow we are paranoid about Chinese investment,” and he noted that Australia then bought an estimated $120 billion worth of telecommunications equipment from Chinese firms.

“There are of course risks involved with the emergence of any new, great power [but] there are enormous risks involved if we endeavor to bypass China, to turn our backs on China.”

Downer utterly rejected criticism of Huawei, saying in another 2012 interview that “this sort of whole concept of Huawei being involved in cyber warfare, presumably that would just be based on the fact that the company comes from China. This is just completely absurd.”

Downer left the Huawei board in 2014, according to the company’s Washington spokesman.

Downer became Australia’s ambassador to the UK in 2014 and was serving in that role when he met in 2016 with Trump aide George Papadopoulos, who allegedly told him Russians had incriminating information about Trump’s presidential opponent, former Secretary of State Hillary Clinton.

It was Downer’s tip to the FBI about that conversation that ultimately led to special counsel Robert Mueller’s two-year investigation that concluded no American colluded with Russians to influence the 2016 election.

Papadopoulos denies Downer’s description of their conversation and claimed that the Australian was helping elements of the U.S. government in developing the false Russia collusion allegation against Trump.

For his part, Downer strenuously denies having any such role, claiming he was too high-ranking in the diplomatic community for such activities.

In addition to serving in London as Australian ambassador, Downer was also associated with a British spy firm, London-based Hakluyt & Co., serving on its board of directors from 2008 to 2014.

Downer was also an ally of Clinton, helping, as then-minister of foreign affairs, to direct a $25 million grant to the Clinton Foundation in 2006 for AIDS/HIV services.