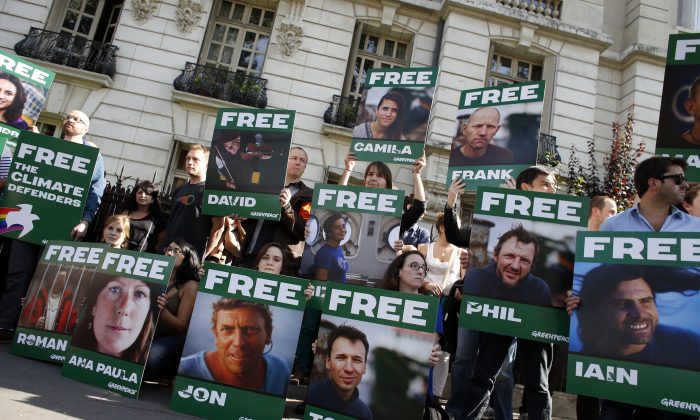 Greenpeace activists protest on Sept. 27 in front of the Russian embassy in Paris, with signs calling for the release of 30 activists from 18 countries arrested while protesting against the extraction of oil in the Arctic. One Australian citizen, Colin Russell, and another Australian resident are among the activists held without charges in a Russian prison. (Thomas SamsonAFP/Getty Images)
Asia & Pacific

Australian environmental activist Colin Russell is receiving legal aid and has appealed his 2-month detention in a Russian prison, says the Department of Foreign Affairs and Trade (DFAT).

Australian officials say they have met with Mr Russell, a Greenpeace activist who has been detained while Russian authorities investigate a Sept 19 protest against Arctic offshore drilling.

Several activists had earlier scaled a Russian-owned oil platform to protest against the drilling, prompting Russian authorities to seize the Greenpeace ship Arctic Sunrise and detain the activists on board.

A court in Murmansk has ordered the 30 activists from 18 countries to be held in jail for two months, but no charges have yet been laid.

Russia’s main investigative agency has accused the activists of posing a “real threat” to the security personnel at the oil platform. They are considering charging the activists with piracy, a crime punishable by a 15-year prison term, according to AAP.

In a statement, DFAT says consular officers have confirmed that Mr Russell has legal representation, provided by Greenpeace, and that an appeal against his detention has been lodged.

“A senior official from the Department of Foreign Affairs and Trade is travelling to Russia this week and will register Australia’s interest in this case, underscoring our consular responsibility for Mr Russell,” the statement said.

Consular officers have also met with Greenpeace officers and prison authorities to pass on care packs to Mr Russell and to establish a prison account so that he is able to purchase items from the prison store.

Irina Paikacheva, the head of a state-connected regional prisoners’ rights watchdog, told AFP that many of the activists are “in a state close to shock” and have complained of cold cells and a lack of suitable clothing and food.

“They had never expected that they would face such consequences for their peaceful protest in a democratic state,” Ms Paikacheva said.

According to AAP, the seizure of the ship has been described by Ivan Blokov, Greenpeace campaign director, as “the most aggressive and hostile act” against the environmental organisation since 1985, when French government agents bombed the Rainbow Warrior ship, killing one man.