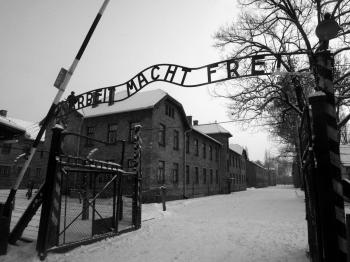 WARSAW, Poland—The theft of the infamous "Arbeit Mach Frei" (“Work Will Set You Free”) sign, which had loomed above the entrance to the Auschwitz death camp in southern Poland since World War II, was likely commissioned by foreign collectors of Nazi memorabilia, according to police.

Citing sources close to the investigation, the Polish Press Agency reported that the sign, which is an integral component of Auschwitz-Birkenau Memorial Museum, was to yield 125,000 Swedish crowns for the thieves.

Dr. Bertrand Perz, an expert at Vienna's Wiesenthal Institute for Holocaust Studies, said in an interview for British newspaper The Independent that there is a large international market for such memorabilia.

The theft triggered widespread condemnation, from Polish President Lech Kaczynski and Polish government officials to representatives of Holocaust memorial groups in Israel and elsewhere. The Auschwitz-Birkenau Museum offered a $30,000 reward for information leading to its return, which is said to have prompted its swift recovery.

The sign was recovered several days after the theft thanks to a tip-off. Five men are currently in custody, facing charges of participation in an organized crime ring, theft, and damage of a historical artifact of particular cultural significance. The sign was partly unfastened and partly torn off its mountings and cut into three pieces to facilitate transport.

The theft counts as the second incident that the sign has disappeared from above the entrance gate of the camp since its liberation. The first time, Russian soldiers removed it in preparation for transporting it back east, until a former camp inmate bribed one of the guards to let him have it. The sign was then taken to the office of a municipal magistrate, where it remained hidden until it was restored back to its regular place.