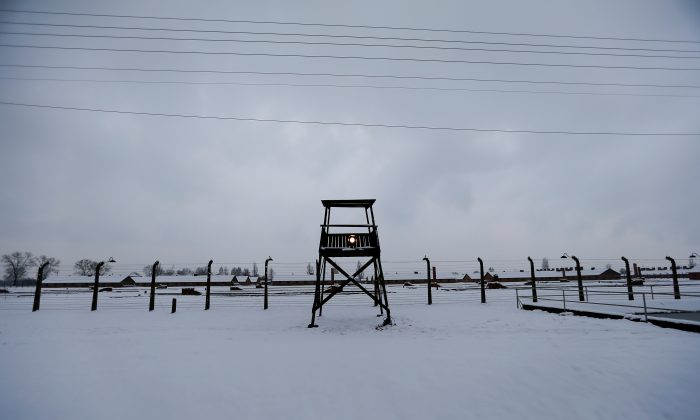 A guard tower is seen at the former German Nazi concentration and extermination camp Auschwitz-Birkenau near Oswiecim, on Jan. 26, 2015. (Laszlo Balogh/File Photo via Reuters)
Politics

The Auschwitz Memorial asked several journalists who defended Rep. Alexandria Ocasio-Cortez (D-N.Y.) over her controversial comparison of U.S. border facilities to concentration camps in Nazi Germany to better educate themselves on the subject; meanwhile, a number of Jewish groups criticized the comparison.

Update: The Auschwitz Memorial issued the following statement in response to this story.

“It’s not exactly correct. What we in fact did was responding to some people’s comments in order to clarify historical details regarding the development of the Auschwitz camp functions. You may also notice that asking people to follow our account is something we do regularly.”

See the original story below.

Julia Ioffe, a writer at the openly left-wing New Republic who was fired from Politico for an obscene missive about President Donald Trump, said that as a Jew she found no issue with the remarks.

“Hi, actual Jew here who lost dozens of relatives in the Holocaust! Concentration camps predated the Holocaust. For example, the Soviets had them before the Nazis,” Ioffe wrote.

If you spend a few minutes learning some actual history, you will find out that concentration camps are different from death camps and have a history that both predates and extends far past the Nazis. https://t.co/Bccy3SaXW0

“If you spend a few minutes learning some actual history, you will find out that concentration camps are different from death camps and have a history that both predates and extends far past the Nazis,” he told Rep. Liz Cheney (R-Wy.) after she criticized Ocasio-Cortez’s comment.

Ocasio-Cortez had said that “The United States is running concentration camps on our southern border and that is exactly what they are.”

Read More
Veterans in the Bronx Say Ocasio-Cortez Is Neglecting Local Issues, ‘She Cares More About Beating up on Trump’
Majority Won’t Vote to Reelect Ocasio-Cortez: Poll
Republican Challenger Says Ocasio-Cortez ‘Literally Ran’ Away From Him at Parade

Both Hayes and Ioffe seemed to ignore that she explicitly referenced the Holocaust, during which the Nazis killed six million Jews, by adding: “I want to talk to the people that are concerned enough with humanity to say that we should not that ‘Never Again’ means something.”

Cheney had written in response, “Please @AOC do us all a favor and spend just a few minutes learning some actual history. 6 million Jews were exterminated in the Holocaust. You demean their memory and disgrace yourself with comments like this.”

Aushwitz was a mixture of work and extermination camps.

Andrew Kaczynski, a former Buzzfeed reporter who now works for CNN, responded to criticism of Ocasio-Cortez by writing about Auschwitz, where over 1 million people were killed by the Nazis: “Auschwitz was a mixture of work and extermination camps.”

The Auschwitz Memorial reached out to both Hayes and Kaczynski, asking them to learn more about the Holocaust.

“Please consider following @AuschwitzMuseum where everyday we commemorate and educate about the tragic human history of #Auschwitz,” the memorial wrote to Hayes.

@chrislhayes Please consider following @AuschwitzMuseum where everyday we commemorate and educate about the tragic human history of #Auschwitz.

Steve Cortes: “You don’t get to define what nationalism means”

In a later tweet, the memorial added: “Auschwitz began in spring 1940 as a concentration camp set up by German Nazis for Polish leadership, intellectuals & resistance. In fall 1941 Soviet POWs were deported. In March 1942 it became a center of mass extermination of Jews & mass murder of Roma http://lekcja.auschwitz.org/en_1/.”

Auschwitz began in spring 1940 as a concentration camp set up by German Nazis for Polish leadership, intellectuals & resistance. In fall 1941 Soviet POWs were deported. In March 1942 it became a center of mass extermination of Jews & mass murder of Roma https://t.co/45MCqODtva

CNN’s Chris Cuomo tackled the subject on his show on June 19, claiming that the term “concentration camp” is not linked to the Nazis while arguing that the nationalism promoted by Trump is, according to a clip posted by conservative reporter Ryan Saavedra.

“She used the phrase ‘never again,’ which we know is explicitly linked to the Holocaust,” responded conservative CNN contributor Steve Cortes.

A number of Jewish groups criticized Ocasio-Cortez’s remarks, including the JCRC of New York.

We urge @AOC to refrain from using terminology evocative of the Holocaust tonvoice concerns about contemporary political issues, as per our letter below. pic.twitter.com/276hH8jRWn

In a letter to the lawmaker, leaders of the group wrote that they were “deeply disturbed by the language used in your recent Instagram live video which seeks to equate the detention centers on America’s southern border with Nazi-era Concentration Camps.”

“The terms ‘Concentration Camp’ and ‘Never Again’ are synonymous with and evocative of the atrocities committed by Adolf Hitler’s Nazi Germany, in which six million European Jews were systematically denied civil and human rights due to their race and ultimately murdered in state-sponsored genocide,” the leaders wrote.

“As concerned we are about the conditions experienced by migrants seeking asylum in the United States … the regrettable use of Holocaust terminology to describe these contemporary concerns diminishes the evil intent of the Nazis to eradicate the Jewish people.”

A previous version of this article stated that the Auschwitz Museum responded directly to Ocasio-Cortez. Epoch Times regrets the error.